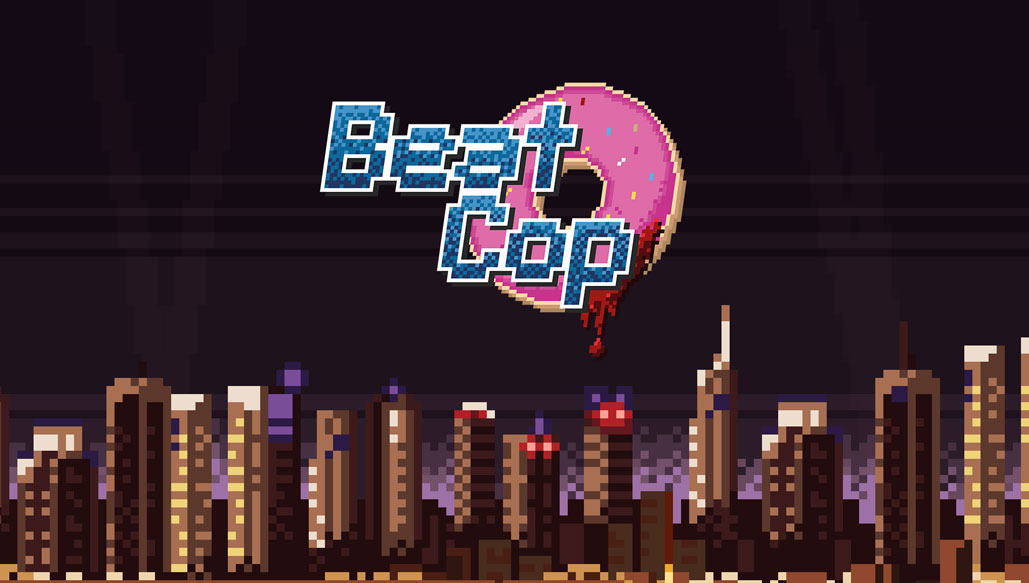 Over the years of watching TV, I have noticed a trend. At times, it seems you can’t flip through the channels without coming across a cop show of some kind. There are many different styles.  If you are looking for serious drama, you can watch CSI, NCIS, Law and Order, Criminal Minds or MCR5 LA (Ok I made that last one up). If you’re looking for something more light hearted, you could watch Reno 911 or Brooklyn Nine-Nine (My favorite and I’m so glad NBC decided to save it). But this obsession with dramatized law is hardly new. The developers at Pixel Crow decided to draw on their fond memories growing up in front of tv in the 80s and create a game that not only captures that feeling but also puts the player in their own 80s cop drama.  This game is Beat Cop.

The game opens with a letter from the devs setting the tone. Beat Cop is not a serious game but one aiming to be funny. And in my opinion, the best way to play the game is to sit back and enjoy. The game is full of cop drama tropes, crazy situations and humor. When I sat back and didn’t stress about doing “the right thing,” I discovered I genuinely felt like I was watching the cop drama show the developers were aiming for, the in-game choices I made simply helped further the drama and draw me in deeper. 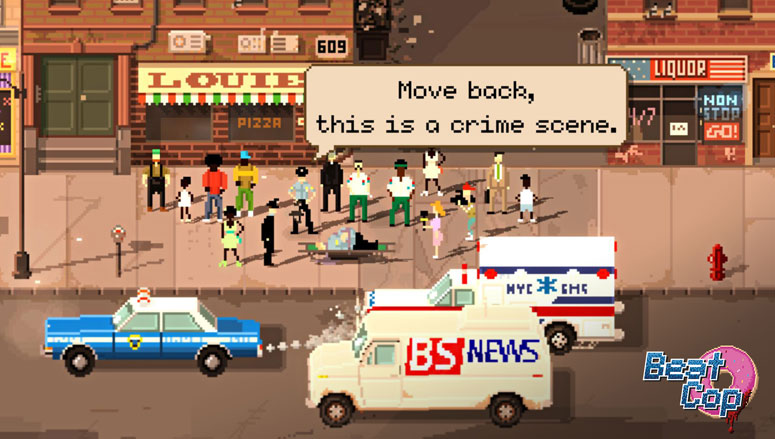 In the game you play as Jack Kelly. He is a detective who has been framed for a crime and demoted to beat cop while his case is being solved. You are assigned to patrol a block, catch shoplifters and write parking tickets. However, as a good detective, you can’t simply sit back and be framed for a crime you didn’t commit. You’ll solve your own case and clear your own name. The catch is you only have 21 days to do it.

This is where the fun of Beat Cop starts. Each day you will have opportunities to help these groups or put a stop to their crimes. If you help them, you’ll gain reputation with their groups, but you’ll lose reputation with the police department. If you stop their criminal activities, the reverse happens instead. But be careful! If you make an enemy of either The Mob or The Crew, they may try to kill you.  As you play, you will have to decide who you will help and who you won’t. All the groups say they can help clear your name, but it is up to you to determine who you actually trust.

However, while you’re busy making friends, enemies, and writing tickets – never forget your crime is not solving itself. While doing the mundane daily tasks, you have to be proactive about solving your case. There are several endings to Beat Cop and each is determined by how you chose to manage your 21 days of covering your beat. 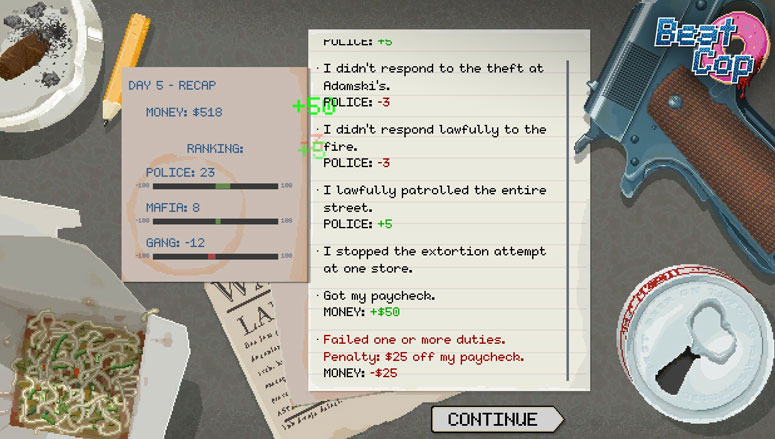 As I stated before, Pixel Crow’s aim was to make a not-so-serious 80’s cop drama. So, if you decide to download and play, let me give you some advice: do not stress about getting “the right” ending. Rather: pop some popcorn, play the story of Jack Kelly, sit back and see what happens. For me, I set out to be an honest cop, but as my game progressed I found myself veering from the noble path. I began to accept bribes for tickets and do favors for The Mob. In the end, I failed to clear my name and ended up still going to prison. Apart from failing to solve my own crime, the game never made me feel like I made “the wrong” choices. Rather, my story unfolded and concluded because of how I played it. I was left with a feeling of wanting to play again to try and see what else could have happened. Like some of the good cop shows, it made me feel like rewinding, rewatching and seeing if there was something I missed before.