Why is Blasphemous Media Important?

I was walking with some friends through downtown Charlottesville on a chilly night. At one point, I brought up how I’d been listening to Jordon Peterson’s lecture series on Genesis. Think of him what you will, but positive takeaways of Christianity like his are largely unheard of from secular angles. He offers fascinating interpretations based in evolutionary and Jungian psychology, and they gave me a broader appreciation for the Bible in a nonreligious sense—that is, why it ethically, emotionally, and socially resonates with humanity.

“Who cares what he has to say about the Bible?” one of my friends said. “He’s not a believer, so he can’t truly teach from God’s word. You’re wasting your time when you could listen to someone who believes what they preach. That’s where wisdom comes from, not Peterson.”

Some of Scripture’s most faithful authors engaged in thought experiments that contrasted the harsh realities of life with God’s teachings as intellectual hangups.

My friend had a point. The beginning chapters of 1 Corinthians warn about receiving spiritual wisdom from those who don’t follow Jesus, even when they may be conventionally smart and/or wise. Believers should rely on their churches, fellow Christians, and the Bible to nurture their faith. Even still, my friend’s words never sat right with me. My interactions with unbelievers on various levels have challenged this in multiple ways. Are all their perspectives flagrant mockery and opposition against God amounting to worthless noise?

Though Christians should be careful in their motives and guard their hearts, I’ll be using three comic books—with fictional takes and commentaries on biblical doctrine and characters—to discuss how approaching media that challenges Christianity can strengthen one’s faith, witness, and love of others.

To Examine The Faith

Job is angry, and he has every right to be. He’s “the greatest of all the people” as a “blameless and upright” man (Job 1:1-3). Nonetheless, he has everything taken from him. What follows is a rigorous debate with his “friends” that you’d expect from the halls of Athens, and throughout their dialogue, Job expresses doubt about God’s judgment and love. Jeremiah does the same in chapter 12 of his titular book. How about the doom and gloom of Ecclesiastes? 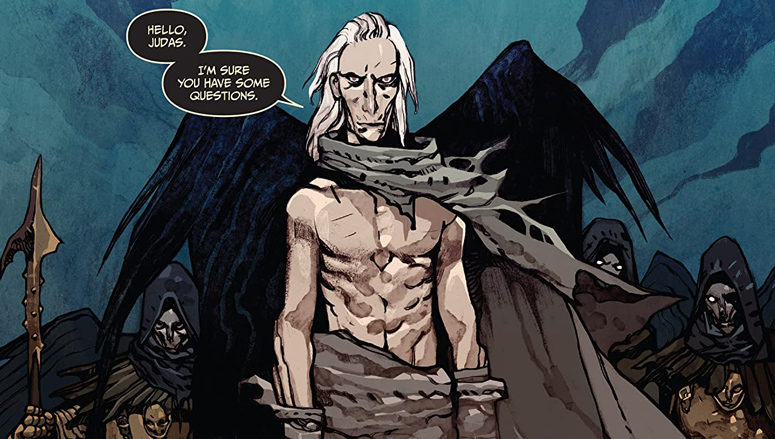 Art by Jakub Rebelka from Judas #2.

Some of Scripture’s most faithful authors engaged in thought experiments that contrasted the harsh realities of life with God’s teachings as intellectual hangups, like Paul discussing the idea that God makes people sin, or that people should sin in light of grace. He said what many believers shudder to even think when evil or human reason tempts them to think ill of God.

Judas by Jeff Loveness and Jakub Rebelka is one such thought experiment, which follows the great betrayer’s time in hell after committing suicide. Loveness asks what many have thought about Judas’s role in the Gospel: Did Jesus use the apostle as a tool to be betrayed? Why did He not try to save Judas from that fate? Why does God harden the hearts of people like him?

The biblical authors say that believers should compare and contrast the Bible’s many books when this happens, but divinely uninspired material in contrast with the Bible can also help believers with hard questions and concepts.

Despite leaving the Christian faith, Loveness provides a profound commentary on doctrinal tensions through the dialogue of Judas—and even Satan—in his comic book. He’s clearly well-versed in the Bible and often quotes Scripture to validate his interpretations. Loveness’ prime grievance expressed through Judas is the structure of redemption chosen by God that’s built on tragedy and suffering. Still, he loves the person of Jesus and ends his story with a call to his readers: Even if you don’t believe in Jesus as God, you should follow the way He lived. Loveness’s Jesus, in the end, would be considered blasphemous, but Judas is among my favorite comic books for how it incisively conveys his relationship with faith.

It’s one thing to hear of or know about the Bible, but to understand it requires honestly wrestling with God and His Word. Christians should not only be prepared for physical suffering, but also the intellectual and spiritual suffering in reconciling life with faith (Ecc. 1:18). The biblical authors say that believers should compare and contrast the Bible’s many books when this happens, but divinely uninspired material in contrast with the Bible can also help believers with hard questions and concepts. While I read Loveness’s work, I did as Luke said of the Bereans, who “examin[ed] the Scriptures…to see if these things were so” (Acts 17:3), and Paul writes that if you “think over what I say…the Lord will give you understanding in everything” (2 Tim. 2:7).

To Live Out Faith

With blasphemous ideas or art, there’s a difference between shock value and criticism. There is little to no value in the former since it truly is worthless noise. But criticism is not the same, and there’s a difference of intent with active participation in, versus passive consideration, of criticism when it can be considered blasphemous. People aren’t guilty of blasphemy by merely reading it, because if that were so, the Bible itself would condemn its readers. What matters is how Christians react to and learn from it, and they can learn how not to do that by looking to last year’s announcement of Mark Russell and Richard Troy’s comic book Second Coming. The vehement reaction to its publication encouraged DC Comics to drop it. 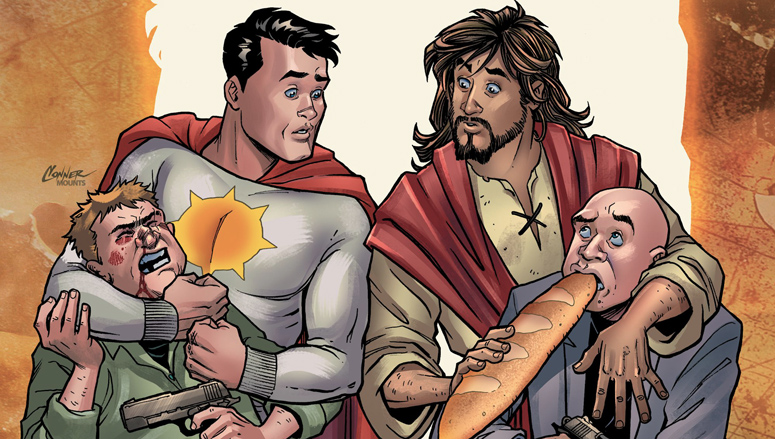 Art by Amanda Conner for the cover of Second Coming #1.

Whereas Loveness poses issues with doctrine, Russell addresses issues related to modern Christian living. This God is seen in opposition to Jesus in Second Coming as a vindictive, crotchety old man who thinks his son can learn a thing or two from a superhero who isn’t afraid to use violence as his sole language of justice. Russel’s Jesus challenges the superhero’s actions and Western society with his mercy and love. In an author’s note, he writes, “Christ…is the counterpoint to the assumption that you can fix the world with punishment. […] The great problems confronting the world today will not be solved by laying down more barbed wire or simply finding new ways to punch people harder than ever before.”

Russell accurately understands that Christ’s mission on Earth was built upon nonviolence, serving as a model for His followers because justice is for God to deliver (Rom. 12:9). In this life, Christians should “not resist the one who is evil. But if anyone slaps you on the right cheek, turn to him the other also” (Matt. 5:39). Russell’s “edginess” isn’t comparable to physical persecution or blind hatred of Christianity, as uncomfortable and vulgar as it can get. He props Jesus up as the greatest superhero!

To respond in conviction with love and in good faith toward everyone—no matter what they say about you or your religion—conveys a great deal more about one’s faith than lashing out ever will.

Russell gracefully bowed out from his partnership with DC Comics and never said anything inflammatory toward Christians when interviewers brought up the controversy. To respond in conviction with love and in good faith toward everyone—no matter what they say about you or your religion—conveys a great deal more about one’s faith than lashing out ever will. Russel moved on and showed how people should act “with gentleness and respect, keeping a clear conscience.” How much more for those who “revere Christ as Lord” (1 Pet. 3:15-16).

To Empathize in Faith

The Goddamned by Jason Aaron and “r.m.” Guéra is bleak and grotesque. It imagines the world of Noah mentioned in Genesis 6:5-6. What makes the story unique is how it takes the “mark” put on Cain as a curse of immortality as a literally “restless wanderer” (Gen. 4:14-15). In Aaron’s story, Cain has lost all hope. He curses his parents for forsaking paradise; he curses everyone for their depravity; he curses God for His silence over and ignorance toward rampant sin. 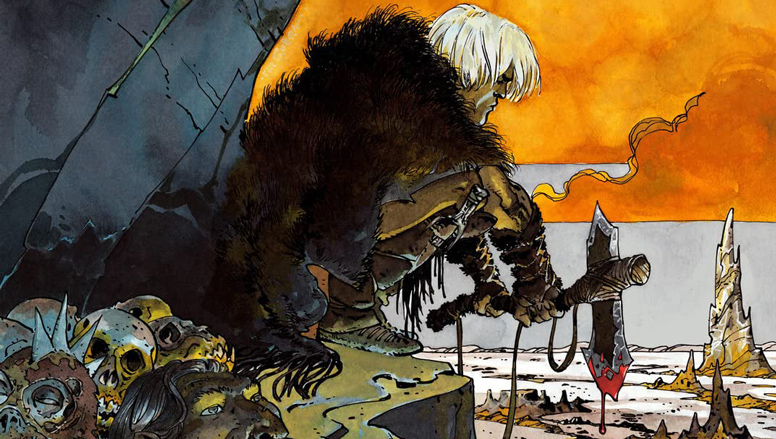 Art by r.m. Guerra for the cover of The Goddamned #1.

David would sing his Psalms to this version of Cain. The prophets and apostles would understand, too. Followers of Jesus or not, we have all been angry and confused like Aaron’s Cain. “For He makes His sun rise on the evil and on the good, and sends rain on the just and on the unjust” (Matt. 5:44-46). It’s a shame that when this Cain is moved to lay down his life for another, he has his returning hope ripped out from under him with betrayal, returning him to despair. “We’re all his flawed creations,” he says in defeat. “We’re all destined to kill ourselves. To kill each other. To defile the world around us.”

Aaron captures the experience of the soul on its darkest nights. We’ve all felt burned and mocked in our circumstances, and Christians can’t help but wonder, “Why, God?” some days. That’s why Christians shouldn’t act like they have it all together—that they have not experienced doubt and suffering. To be like Jesus is to bare our pain and bear others’ pain. If I were with Aaron’s Cain, I would hug and shed tears with him. I too would weep at the depravity in his world and admit I see myself in his apathy and anger. But I’d also say I see Jesus in our cries of confusion and sadness (Mark 15:34). He was “a man of sorrows and acquainted with grief,” and as he shared in our suffering, so too do Christians (Isaiah 53:3).

People matter to God, so Christians should reflect this in earnestly listening to the real questions and difficulties unbelievers have with the Bible.

What can secular perspectives teach Christians then? That they should come to the table and lay their faith, culture, and selves to bear. People matter to God, so Christians should reflect this in earnestly listening to the real questions and difficulties unbelievers have with the Bible. This can help believers draw closer to Jesus by understanding why He had a burden for the lost. And just maybe, the lost can be found if we “reason together” with more than just fellow believers  (Isaiah 1:18).