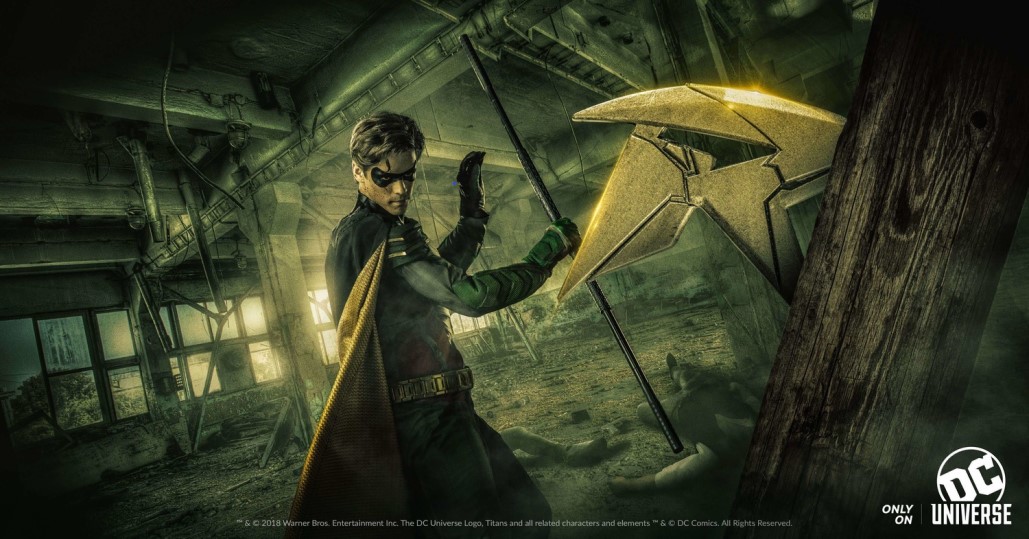 TITANS: No One To Blame

This post contains spoilers for the first season of TITANS.

The ultra-brutal “mature” incarnation of the Teen Titans was the anchor of DC Universes initial advertising. The first images of the series that hit the internet were met with roaring disapproval and rejection. Then when the series finally hit, people were hesitantly engaging, but by the end of the first season, most naysayers were silenced at how well the series was executed. Yes, it was brutal, violent, and a bit over the top, but it was also one of the best made DC products in a long time. This is DC’s TITANS.

The story centers around an adult Dick Grayson that has abandoned not only Gotham but also his mantle as Robin. We find Dick doing police work far from home and attempting to distance himself from Batman and all that he represents. He is also failing at this separation because, in his time of need, he goes right back to donning the cape and mask. Dick hates the experience. He blames the mask for his brutality and the costume for his lack of self-control. He blames the mantle for doing the things that he is ashamed of. Those outfits are high tech and exceptionally well made, but outside of the legendary Batman “Suit of Sorrow,” these costumes have never affected the wearer’s character. Dick Grayson thought that by not putting the suit on, he would be able to control the brutality inside himself, but sadly, that was just an excuse.

We can’t deny what’s broken inside ourselves.

Jesus makes it clear that outside sources aren’t what corrupt us, but rather, what’s already inside of us. “Nothing outside a person can defile them by going into them. Rather, it is what comes out of a person that defiles them” (Mark 7:15, NIV). It’s our own sinful hearts and desires within us that corrupt us. This becomes dangerous when we won’t acknowledge the sin, darkness, or danger within us. When we scapegoat it onto others or blame our circumstances, we ignore the problem. The longer we ignore the problem, the darker and more dangerous it gets. We see this as well in the destructive character of Jason Todd. Now I love me some Red Hood, but this Jason is brutal even by Red Hood standards. Jason knows full well how destructive his actions are, he isn’t blaming anyone else, he is embracing it. Embracing your darkness and bad choices is just as damaging as ignoring them.

Dick goes on to try to warn Jason of where his life is heading;

“You want my advice, don’t be Robin. All those years Bruce was helping me? He was turning me into a weapon. His weapon. He may have you convinced that you can get everything you ever wanted, but you can’t unlearn what he teaches you, and you can’t control it. Believe me, the price is too high.” 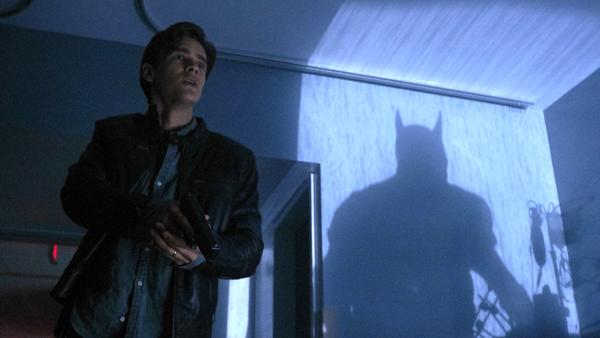 Even when he confronted Jason, Dick was blaming others. He blamed Batman. He blamed his teaching and training. He never wanted to deal with the fact that maybe, there was just some darkness inside himself he needed to deal with. The guilt, the anger, the bitterness, the rage, that maybe Batman and the mask didn’t put those things in Dick, they were already present.

The apostle John shows us in no uncertain terms that we can’t deny what’s broken inside ourselves. “If we claim to be without sin, we deceive ourselves and the truth is not in us. If we confess our sins, he is faithful and just and will forgive us our sins and purify us from all unrighteousness” (1 John 1:8-9, NIV). He shows us that we can’t ignore what’s dark within ourselves, but that it’s when we are honest and are ready to deal with it that we find healing, cleansing, and peace.

Eventually, Dick finds himself at the mercy of “The Organization,” and is pumped full of drugs that bring him face to face with the problems he was running from. He has to stand broken before a younger rage-filled version of himself that has no mercy for Dick’s delusions. 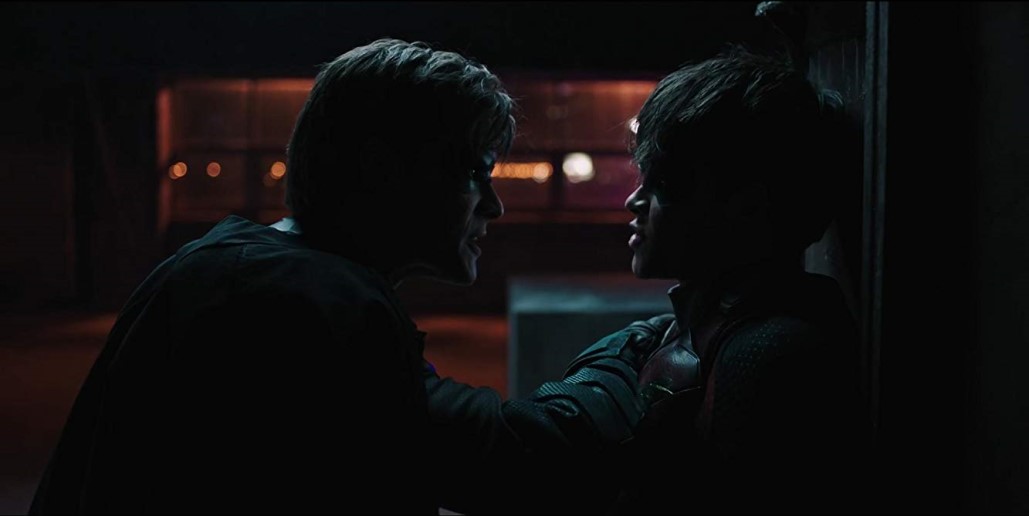 It’s a lot better to deal with your own darkness than have a younger version of you beat you senseless with a bo staff while screaming at you. In the book of Psalms, David points out a far healthier alternative. “Search me, God, and know my heart; test me and know my anxious thoughts. See if there is any offensive way in me, and lead me in the way everlasting” (Psalm 139:23-24, NIV). David asks God to search him out, to see what’s broken and damaged. He wants God to lead him to a place of fruitful life rather than letting the darkness inside him lead him down the wrong path. That’s something Dick could have greatly benefited from.

In the final episode of the season, we see Dick in a delusional world of Trigon’s creation where he is being tested, and where his true character is revealed. Trigon leads him through a series of situations that almost always gives Dick a crossroads, that constantly gives him the chance to choose to walk away, to forgive, to be content where he was, to let the past go. Sadly, the further Dick went, the darker things got. He was given blatantly clear chances to turn around. In one of his final opportunities to choose, Starfire made a plea;

“Look where that led you. A life you care about. A wife, a kid. You chose the better life. Go back to that.”

She directly told him to turn around, but he refused. He ended up in a place where all his bitterness, rage, and frustration erupted into a boiling point as he chose to kill Batman.

“This is what you’ve always wanted. You wanted me to give in to the darkness, to become you. You win.”

Once he had finally gone that far, Trigon had full control over him, although Trigon rightfully claimed no responsibility in the matter.

“This was not my doing. This was his. I offered your friend a path that wound down many roads, but ultimately, he chose his own way: to embrace his darkness rather than deny it’s existence. This was his struggle. He tried to flee from who he is, from what he is.”

Even though Trigon is a malicious demon, he’s right. Dick had plenty of ways out, just like we do when it comes to our own darkness and temptation. “No temptation has overtaken you except what is common to mankind. And God is faithful; he will not let you be tempted beyond what you can bear. But when you are tempted, he will also provide a way out so that you can endure it” (1 Corinthians 10:13, NIV).

When you are given the opportunity, choose the path that leads you to life, and light.

Dick refused to take the ways out he was given, and the more he pursued the dark path, the more control it had over his life. Sin inside of us escalates. It starts out as something small and continues to gain momentum until it wrecks our hearts and lives. The season ended with a cliffhanger of Dick under Trigon’s possession, but I’m sure an episode or two into season two and that will be resolved. Unfortunately for us, our lives rarely function so predictably scripted. If we keep making horrible choices, a clever plot twist isn’t likely to save us from our consequences.

Dick may have failed his trial, but he wasn’t blinded to the situation. He knew that he had choices to make. Before everything fell apart, Donna Troy gave him some serious life advice;

“When Diana took me in, she showed me how to fill that hole that fire left in my life with love, and with family. That’s just what the Amazons do. They have traditions of empowerment and self-discovery. Bruce filled that hole in your life the only way he knew how, with rage and violence. Wonder Woman was born to protect the innocent, and Batman was created to punish the guilty.  We’re not them, neither one of us. I didn’t quit being wonder girl, I just realized I could do more good being Donna Troy. Do you understand? You’ll never be a civilian, Dick. You lost that chance the day you became Robin. And you can’t be Robin anymore because for all the good he did, ultimately, he was an echo chamber for Bruce’s pain, and for yours. You wanna go out there and kick bad guy ass, you wanna make sure there’s not a chance, not a single chance even one of them gets away? Do it. Don’t be Batman or Robin. Be something else. Be someone else.”

Every day of our life, we have the opportunity to choose who we will be. We get the choice to move towards life, or towards death. We can’t move towards life if we are still holding on to what’s dead in ourselves. Dick had opportunity time and again to change his trajectory, but thankfully it won’t be Dick’s last chance. Today won’t be your last chance either. We still need to take the paths we are heading in very seriously.

Own what’s dark inside you. Don’t run from it. Don’t blame it on others. Don’t let what you are hiding drag you down to the point you lose yourself. When you are given the opportunity, choose the path that leads you to life, and light. Whatever is broken, dark, or dying inside you, God wants to heal, forgive, and guide you from it.

This is an excerpt from the upcoming sixth edition of Faith and Fandom from Hector Miray. Look for the expanded version to be released summer 2019.

Pull List
The Pull List
Chris and Hector talk industry news, their pulls and #1 comics and their reviews of "WW84" with "WandaVision".

Pull List
The Pull List
Chris and Hector long for that convention experience, DC Comics ends their exclusivity with Brian Bendis, and more!

LTN Radio
LTN Radio Re-Cap
Our weekly re-cap of the Specials, Shorts, and Exclusives aired on LTN Radio for the week of Nov. 23rd through Nov. 29th. Listen live on LTNonair.com!

LTN Radio
LTN Radio Re-Cap
Our weekly re-cap of the Specials, Shorts, and Exclusives aired on LTN Radio for the week of Nov. 9th through Nov. 15th. Listen live on LTNonair.com!

LTN Radio
LTN Radio Re-Cap
Our weekly re-cap of the Specials, Shorts, and Exclusives aired on LTN Radio for the week of Nov. 2nd through Nov. 8th. Listen live on LTNonair.com!

Jonathan Clauson
The Pull List
DC Fandome Part 2 rolls on with a more specific comic focus, but appears to underwhelm. Good thing there are new comics for Chris & Hector to sort through!