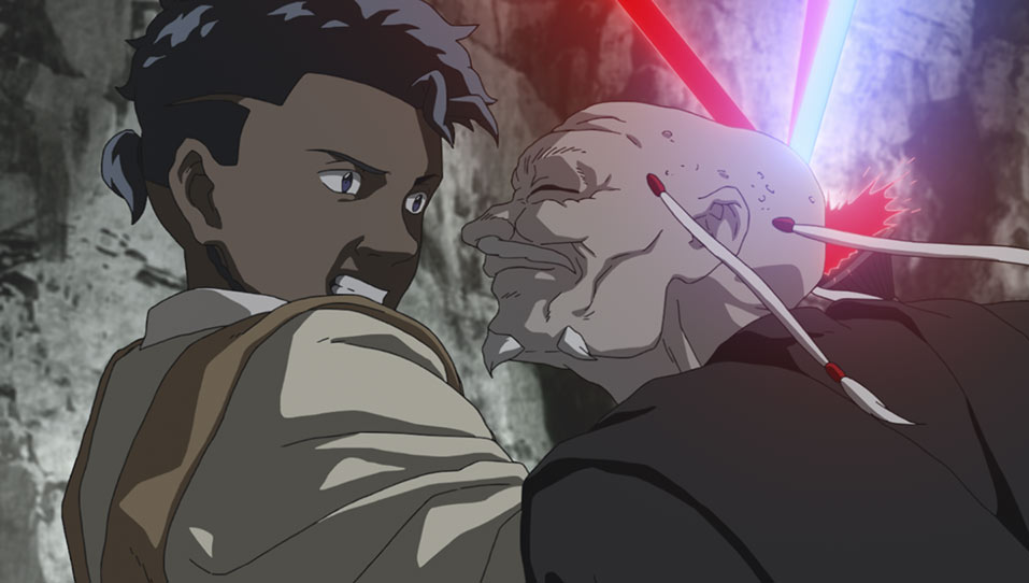 Star Wars is not necessarily epic fantasy. It’s not really science fiction either. George Lucas considered his universe to be a mishmash of these genres and others like classic mythology and chambara. At its heart, Star Wars is closest to a fairy tale set in space. While fairy tales can be enjoyed by all, Lucas made his movies for children with clear moral codes and life lessons seen through the Light and Dark sides and various rebellions and empires. “The Elder,” episode 7 of Star Wars: Visions, exemplifies this understanding of the franchise.

Animation studio Trigger, Inc. cares little for deep lore or rousing action. “The Elder” starts out with a lengthy, one-on-one conversation between a Padawan and his Jedi Master. The latter senses a disturbance in the Force as they travel through hyperspace, and so they redirect course to the troubled source on a backwater planet. They doubt that the disturbance could involve a long extinct Sith, but sign after sign, they realize that the impossible must be true, and the sense of foreboding culminates into an unbearable suspense when the Padawan is drawn into a trap by the Sith. Alone.

Defense is not only meant to guide fighting techniques. It is much more than that—a holistic state of body, mind, and spirit impacting our moment-to-moment decisions in all things.

From the very beginning aboard the Jedi spaceship, the apprentice unabashedly confesses his eagerness for action. He’s gently admonished for it and waves away his master’s concern several more times. Episode director Mashiko Otsuka said, “It’s quite typical in the Star Wars series, the hot-blooded young man, the Padawan who wants to fight, and the master who takes his ego down. I wanted to keep it the same as the original, which we were already familiar with.” We see this in every generation with Anakin, Luke, and Rey, who all suffer the consequences of doing before thinking. Yoda best conveys the behavior that leads to this folly in The Empire Strikes Back: “Adventure. Heh. Excitement. Heh. A Jedi craves not these things.”

While adventure and excitement have their place, the context in which Yoda teaches this is best  considered in relation to seeking these things out via conflict. Yoda later tells Luke that a Jedi uses the Force for defense, never for attack. In “The Elder,” the master tells his student, “A Jedi does not seek out aggression. A Jedi must find balance and stillness.” Even though the Padawan exhibits an unusual composure and patience when confronted by the Sith, this did not extend to his posture. He had commendable calm in combat, but defense is not only meant to guide fighting techniques. It is much more than that—a holistic state of body, mind, and spirit impacting our moment-to-moment decisions in all things. 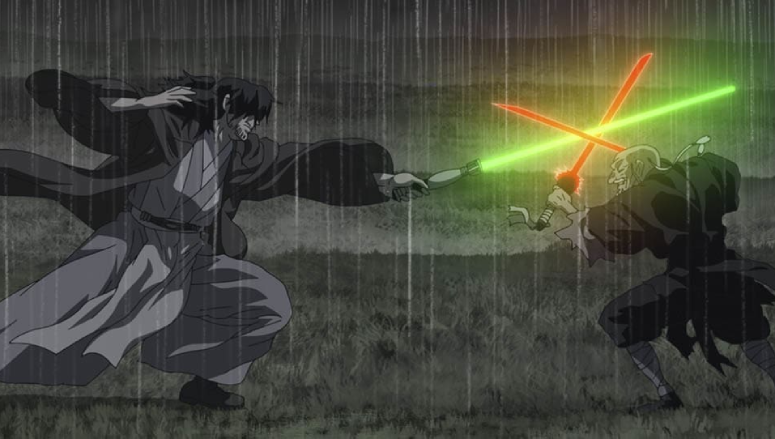 Call it considerate, peaceful, self-reflective—these could all be said to stem from principles of defense that should manifest in our speech, beliefs, or expression. Amid the Visions catalog, even this episode—from its visual presentation to its writing—exudes thoughtfulness in its small-scale scope and intimate focus. Yoda himself says that defense is achieved when “you are calm … at peace … passive.”

The Sith acts as a foil for the Padawan of what happens to those who seek strife. The wizened, unsettling man is defined by bloodlust in all he says and does, being carried away by the thrill of the fight, and the rage of not getting his way. He doesn’t claim the title of Sith, saying that his kind wiped themselves out by trying to get the one up on each other. He implies that the Sith are meant to direct their conflict outward, but despite his enlightenment, his fate remains sealed. An obsession with conflict and aggression, internal or external, will eventually lead to ruin.

A right view of defense can bring our attention outside of ourselves, allowing us to be prepared for anything and anyone. While it may not sound intuitive, it can also prompt greater self-awareness by looking inward from the outside. They say that the best defense is a good offense, but here, it’s the other way around. That’s what wins the day for the Jedi … and this episode.