Spoilers for Raya and the Last Dragon are discussed in this article.

It had been a long day toiling on a construction site. As I trudged through the mud toward my car, nothing was on my mind but taking a long shower and crashing in bed; however, I was abruptly awakened from this reverie. A lady approached and claimed her tire was flat. She needed someone to take her to a nearby tire shop to buy a new one before closing time because she didn’t want to leave her daughter stranded at school.

I had no reason to doubt her, but my co-workers did. They pointed out how her tire didn’t look flat, and that the money she requested was hardly enough. Why didn’t she have a credit card? Why was her phone dead?

I always get angry when I’m reminded I must temper my desire to help others with cautious suspicion. […] What and how much should trust demand of us?

I insisted we at least give her some cash, and upon doing so, she got in her car and left.

Did she mean her tire was almost flat? Was she lying the whole time? Exaggerating? She did seem genuinely distressed, and at one point, she was willing to ride with me and leave her van behind. Either way, I was gently cautioned by an elder for trusting a stranger so willingly because there were holes in her story, and for all I knew, I could’ve been baited into a carjacking or robbery. Maybe he was right—it is shortsighted to take everyone at their word because people will take advantage of kindness and generosity.

On the way home, I was flustered by my naivete. I always get angry when I’m reminded I must temper my desire to help others with cautious suspicion. A few months later, watching Raya and The Last Dragon recalled this point of personal contention with a moral dilemma that drives its narrative: What and how much should trust demand of us? 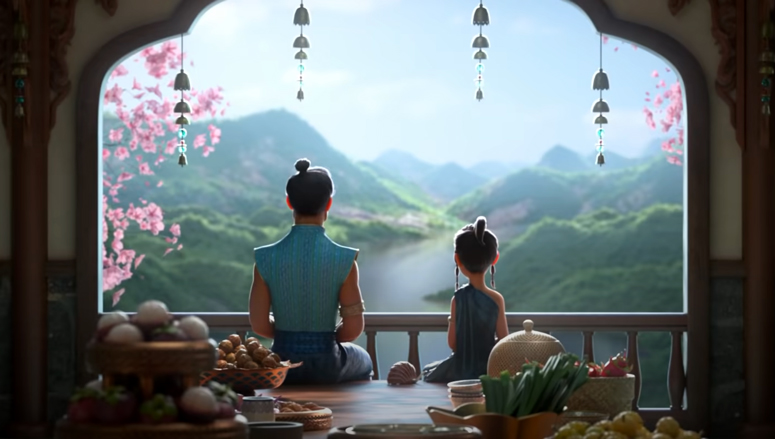 Raya’s father, Benja, seeks to bring together a world divided by difference. Animosity and misgivings are long held among its five tribes, but their very names—Talon, Fang, Tail, Spine, and Heart—suggest parts of a whole that should be brought together. Benja, the chief of Heart, believes this to be a truth that can herald a greater prosperity than in ancient days. Raya thinks this vision of “Kumandra” is a pipe dream that will fall apart with someone exploiting the vulnerability required to make this happen. Nevertheless, Benja insists there’s more in common among all the tribes than not. You have to start somewhere building bridges.

From the looks and personalities of all the tribes, it’s hard not to blame Raya for her doubt until she makes a fast friend from Fang named Namaari; however, she betrays Raya after she led Namaari to a mystical relic protecting Heart. Soon a swarm of shadow monsters invade that turn people into stone. Tensions escalate, the artifact is destroyed, and soon after, Benja goes down along with all of Heart’s people. It hadn’t even been a day into his unification efforts.

Jesus advocates that his followers be as “wise as serpents and innocent as doves,” but how does one balance the earthly practicality of self-preservation with the divine ideal of self-sacrifice?

Was Benja foolishly naive? Should he have risked his tribe’s safety for believing their rivals could become allies? Raya escapes the lapidary fate of her people, but is convinced all the more that humans are incapable of creating and maintaining unity and peace, so she conducts her life in isolation and only relies on others with temporary, wary alliances. For years, she searches for the dragon Sisu, who’s the only hope she has to free her father from his imprisonment. There’s only one problem—the great and powerful Sisu is as hopelessly optimistic in people as her father was.

The film further suggests that it’s foolish to extended trust to others where there’s any doubt. In Raya and Sisu’s mission to regather the pieces of that artifact across the tribes, one person attempts to trap Sisu and turn her into stone after feigning a friendly, helpful persona. Raya also encounters a deceitful character who tries robbing her, but she realizes the thief has no family and almost no choice but to steal in order to live, so she invites her to join in their quest, who quickly proves a steadfast friend. The same occurs when the group befriend a barbarian who put on a tough act out of fear and loneliness after losing his entire tribe to those shadow monsters. On the other hand, when Namaari reemerges, Raya thinks she deserves no second chances, but Sisu disagrees. 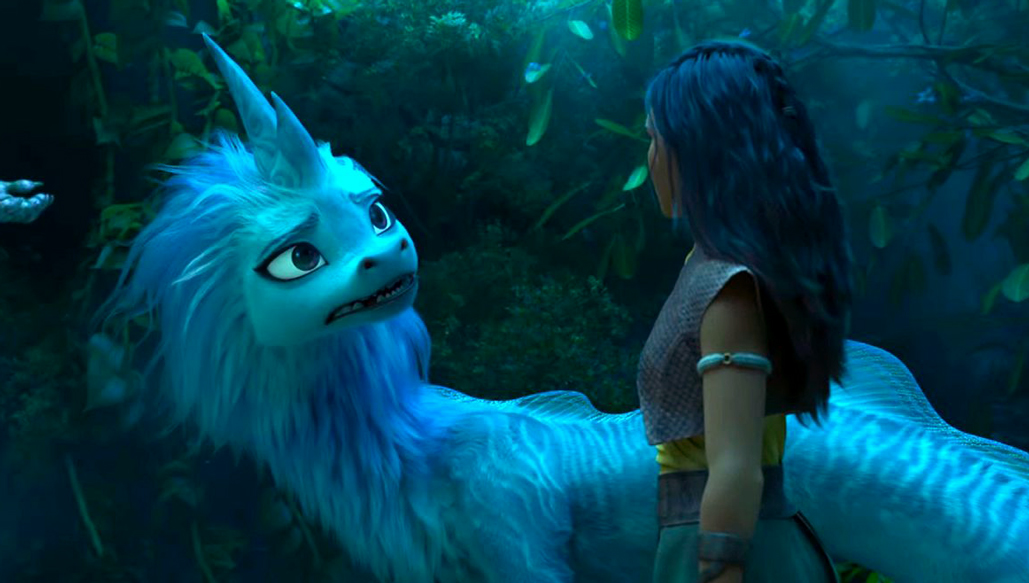 Which is it? Raya goes back and forth on her willingness to trust others, and Sisu continues to believe anyone can change despite being burned before and knowing about the painful betrayal of Namaari. Is Sisu stupid? Is Raya hypocritical? Who should we trust?

Jesus advocates that his followers be as “wise as serpents and innocent as doves” (Matt. 10:16), but how does one balance the earthly practicality of self-preservation with the divine ideal of self-sacrifice? The Bible both praises (Mark 10:15) and warns (1 Cor. 14:20; Prov. 1) against childishness applied to faith and reasoning. Yet the former must guide the latter, and sometimes, a biblical trust means we will incur suffering from those we show our love to. Raya and the Last Dragon asserts this is true not only for the truster, but also for the trusted. To prove that unity and forgiveness are possible, Raya and her friends put their lives in Namaari’s hands at the film’s climax. The antagonist showed no signs of change until trust was extended to her by Sisu soon before then.

It was risky. It was foolish. But this is the way of dragons in Raya’s world that leads to Kumandra, and such are the ways of God in our world that lead to heaven. 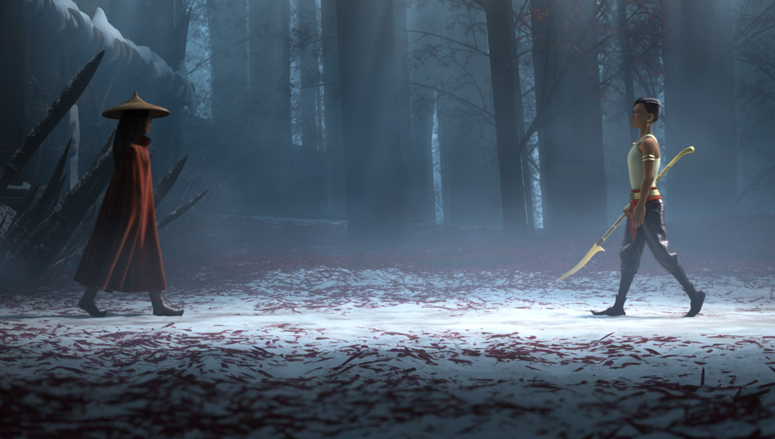 Naivete is built upon the assumption that everyone is of pure heart, and this posture is no ideal to dismiss. This was and can be a reality once more, but in our knowing good and evil, “shrewdness” is required in the meantime to protect ourselves and those we love, which Raya and The Last Dragon doesn’t adequately explore or define despite its inspiring message. We must recognize when we are being deceived and advocate for ourselves; we must firmly rebuke hate and stand up for others

Faith gives Christians clarity in recognizing good and evil, but this doesn’t preclude extending grace, wisdom, and forgiveness to those who wrong us. Just as someone should escape an unremittingly abusive person, so too should they “forgive the inexcusable, because God has forgiven the inexcusable in you” (The Weight of Glory, 182). So too should they pray for this enemy and leave the door open for restoration of the relationship and their heart. It’s not about blowing up bridges, but withdrawing them when necessary. Benja demonstrates this perfectly in defending Raya when she is betrayed by Namaari and surrounded by her tribe, but never once does he relent in extending an olive branch, even with a sword held at the ready.

Navigating the balance is not clear cut. The circumstances we deal with can vary greatly in our interactions with people. Sometimes, we should heed our gut, and sometimes, we should heed our heart. Either way, both should be informed by Christian naivete grounded by shrewdness. Our application of this will be limited and imperfect, sometimes to our own detriment; however, “Trust clings to the belief that whatever happens in our lives is designed to teach us holiness” (The Ragamuffin Gospel, 120). Day by day, and person by person, the presence of naivete makes it possible for us to push past our presumptions to invite the most unlikely of individuals into the “fairy tale” of something like Kumandra so that it becomes our reality.