J. J. Abrams had so much to tie up with Star Wars: The Rise of Skywalker. Who are Rey’s parents, if they even mattered? Will Kylo Ren turn to the Light side and Rey the Dark? How will classic characters like Leia and Lando come into play? How in the universe is the Emperor back?

No matter how you slice it, the film is packed with revelations and story decisions that have pulled audiences left and right. In the conclusion to Love Thy Nerd’s Skywalker Saga reflection series, many of its writers have come together to offer their thoughts on the cap to a grand story 42 years in the making.

Hereafter, spoilers are discussed within some of our writers’ opinions, so consider having been warned scrolling onward. 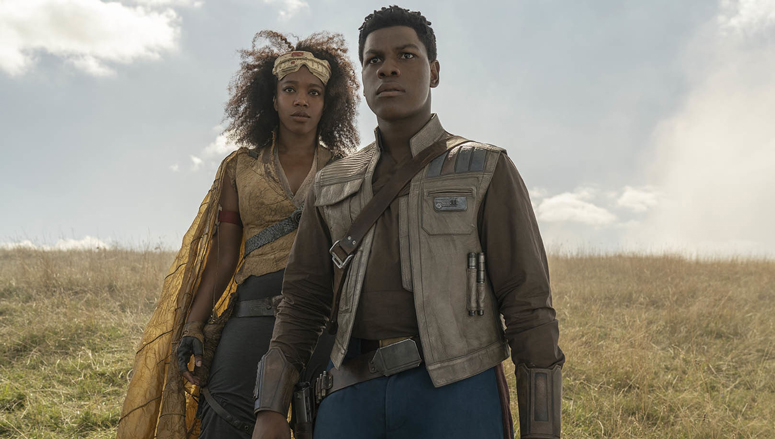 In almost complete contrast to the methodical, almost snail-like pace of The Last Jedi, The Rise of Skywalker moves at a blistering speed. While it keeps the action coming almost nonstop, it provides very few moments for us to catch our breath with anyone not named Kylo or Rey. However, when we do get those moments, they are poignant and profound.

Lando telling Poe that nobody is truly ever “ready” to start being a leader was a great, quiet moment of an elder passing along timeless wisdom to someone in a character crisis. Even though it wasn’t fully explored, Finn found a new friend with another Stormtrooper deserter in Jannah, and he was legitimately excited about that.

Ultimately, the movie came down to Rey and Kylo becoming what they chose to be. Rey showing that you aren’t defined by the deeds of those in your family is universal; we’re all accountable for our own decisions and we all need to forge our own paths. Kylo also showed that we can turn around and become better than what we were in the past. No one is past redemption. The Rise of Skywalker hit me hard in these ways, and I’m glad it’s something they explored in the two lead characters. 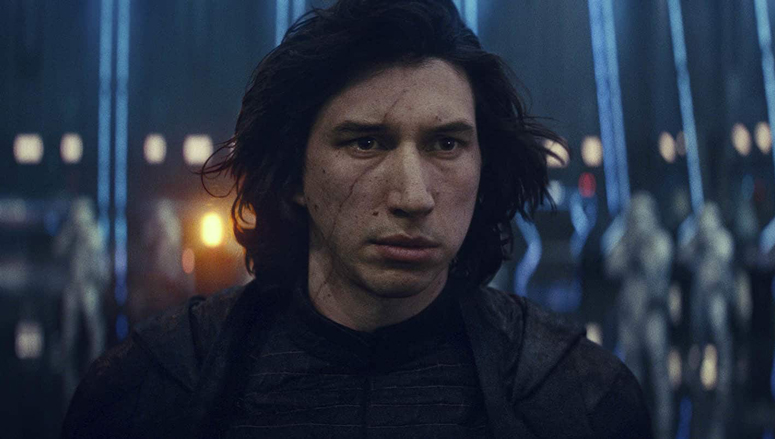 The Rise of Skywalker is not the only one at war with itself, but also my feelings toward it.

On one hand, the final chapter feels like a poorly paced and bluntly written roller coaster. It uses so many characters to prattle off unnecessary exposition and repeat lines from the saga with the subtlety of a war hammer. Themes and revelations established by The Last Jedi are lazily retconned to the point of feeling like an unwarranted apology for Rian Johnson’s direction of Luke’s character arc. Major plot points and characters are respectively glossed over and poorly integrated with the likes of Palpatine and Rose.

On the other hand, the film reminds me of fairy tales and myths of old where sensibility and nuance are thrown out for fun. Plot contrivances and McGuffins? Who cares? Perhaps there’s something of value for Star Wars to treat itself like a playground after the weighty, dark tone of The Last Jedi, but The Rise of Skywalker left me wondering if that was at the expense of confusing its seeming trajectory. The film’s insistence with relying on bloodlines is in full force, but also admirably teaches they don’t determine your destiny or who your family is. Kylo Ren at least remains Star Wars‘ most compelling character; I’m content with his arc throughout the trilogy.

If anything, The Rise of Skywalker captures the spirit of Star Wars in the heart of its execution, but upon closer examination, the deftness of that execution falls short of how the Skywalker saga’s characters and themes could have been more powerfully handled. 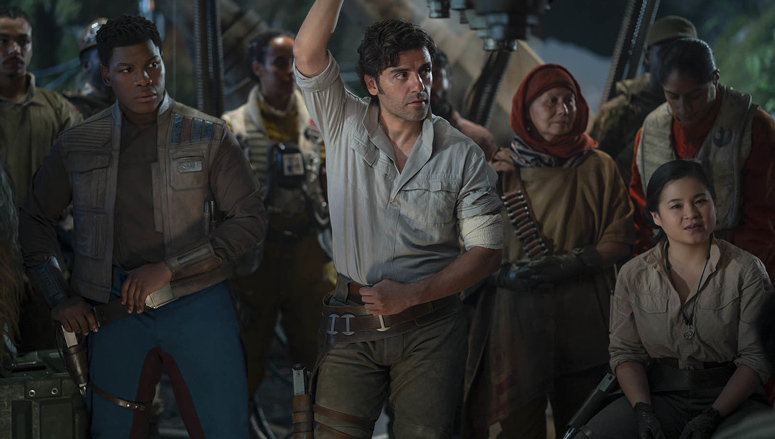 Due to either pressure from vocal complaints regarding The Last Jedi or his own lack of imagination, J. J. Abrams crafted a conclusion to the Skywalker saga for the lowest common denominator. He’s taken some of the most interesting and controversial ideas established in the previous film and rejected them, seemingly afraid of nuance and complication.

Rey has to be part of someone’s lineage, because I guess that’s how we’ve always done it. There has to be even bigger stakes (multiple planet destroying ships! The power of all the Sith!) because audiences clearly can’t care about more modest, personal stakes.

It seems Abrams also doesn’t trust his audience to pay attention. Characters in The Rise of Skywalker are constantly explaining, multiple times over, what’s happening and how they feel about it. It’s a testament to the acting chops of the cast and how well they survive the worst Star Wars screenplay. With one or two notable exceptions, he’s cut-cut-cutting to different angles and camera movements with poor composition all the time. Star Wars was built upon classic cinematic techniques, inspired by the masterly works of directors like Kurosawa. No longer.

I didn’t hate this movie, even though it is my least favorite of the new trilogy. There are individual scenes and moments of beauty, particularly with Rey and Kylo. I only wish it wasn’t so safe. 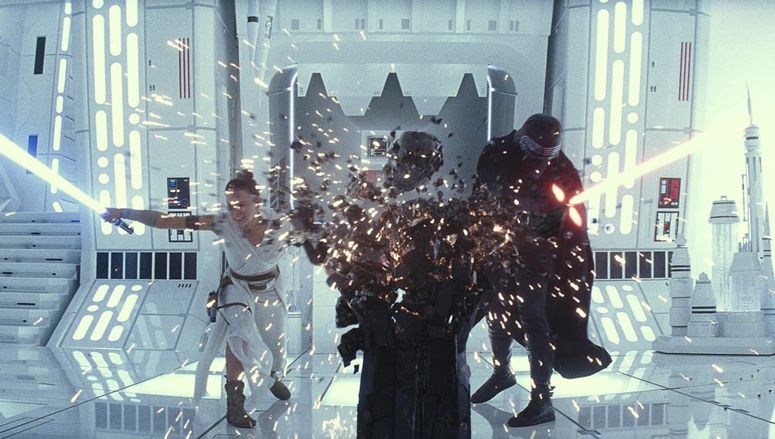 Watching The Rise of Skywalker is not unlike eating a whole box of cookies. It’s pleasing throughout the experience, but leaves you wishing better choices had been made.

On its own, like a good cookie, the film is enjoyable. However, while it is very much dressed up like Star Wars, it suffers from Disney’s lack of courage with this trilogy. The Rise of Skywalker tries hard to sell us on its heart, but it’s hollow where its spirit ought to be, even though all the right pieces are in place.

In trying to be all things to all people, The Rise of Skywalker couldn’t stick the landing, even with Kylo Ren and Rey carrying the story with Adam Driver and Daisy Ridley’s stellar performances that are worth the price of admission (along with Babu Frik). However, the duo take up all the air, leaving no space for the overstuffed roster of characters.

Perhaps Disney forgot that in space fairy tales, less is more. In the end, The Rise of Skywalker is only a glimpse of the memory of Star Wars: a sweet experience of sound and light, but ultimately doesn’t know what it is or who it’s for. 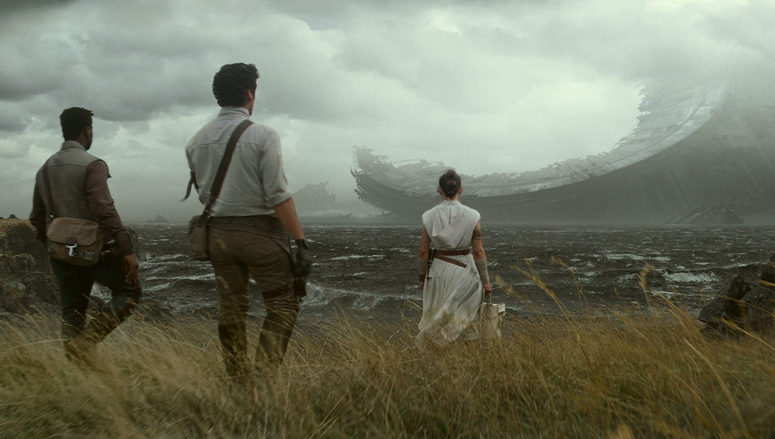 It’s fitting that Disney has become a scavenger like Rey because The Rise of Skywalker is a complete salvage job by J. J. Abrams. Whatever vision was set up in The Force Awakens was obliterated by The Last Jedi, and this conclusion feels like two movies in one. Had the trilogy been developed correctly, the middle film would’ve set The Rise of Skywalker up with enough room to explore its characters and themes to their trilogy conclusions.

I loved the film for what it needed to be and, within the framework Abrams had to work with, it felt like he succeeded. I understand the frustrations people have with the film, but they’re misplaced and should be directed at the heads of Disney overseeing the trilogy.

Perhaps the planned trilogy concept was truly too much and needed to change, but at the least, Disney should have developed a vision for all three films and stuck to it. Given all that, we saw in The Rise of Skywalker and The Force Awakens as an incomplete trilogy from Abrams that could have been cohesive and paced well. 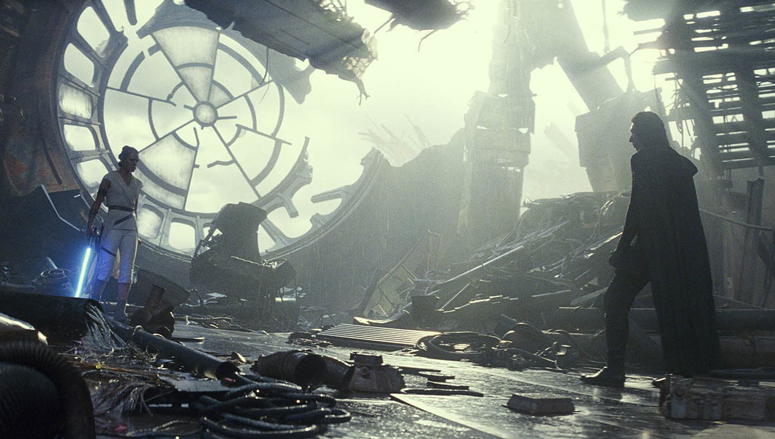 I walked into The Rise of Skywalker with a sense of dread. Early reviews had already insinuated that the movie ignored, or even insulted, many of the things that worked well about The Last Jedi. Ultimately, my dread worked in my favor. As long as I don’t overthink it, I can say I enjoyed The Rise of Skywalker.

True, there’s a lot that easily falls apart, the overall premise, which felt more like a panicked reaction to The Last Jedi than a logical flow of plot revelations. And poor Rose could have at least been written out more respectfully.

Fortunately, the heart of the new trilogy—the relationship between Rey and Kylo and their shared tension between light and dark—mostly worked. With the exception of one eye roll-inducing dramatic revelation, the conflict in both of their hearts felt real and wrapped up a series centered around their tension well enough. Is this the movie I wanted after The Last Jedi? No, not really. But that tension between good and evil, between light and dark, has been core to every Skywalker Saga movie, and The Rise of Skywalker succeeded in seeing that vision through to the end.