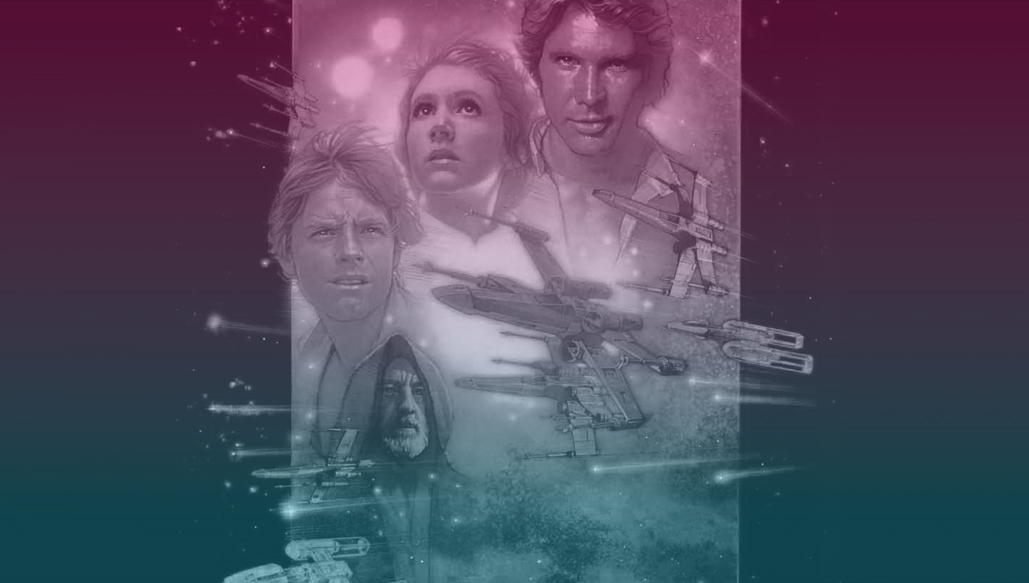 How important is hope? On one hand, we hope for insignificant things all of the time. We hope that a sports team will win, a new Netflix show will be entertaining, or that traffic will be light on the commute home. On the other hand, Paul lists hope alongside faith and love as the great virtues in his letter to the church of Corinth (1 Cor. 13). Is hope only important in proportion to the object of that hope? Or is there always value in hoping no matter what?

Star Wars is as much of a cultural institution as it is a film, and it arrived during a deeply nihilistic and cynical time for America. The Vietnam War had just ended and Watergate was still fresh in the public mind. The broad narrative was that the post-war economic and population boom had led to the progressive, free nature of the 60s before the violence, quickly rising crime rates, and corruption of the 70s. Of course, the reality was more complex. The 50s weren’t so great if you were a person of color, and even though progressive values brought us equal rights in the next decade, the slow decline in the ubiquitous institution of two-parent families had begun. 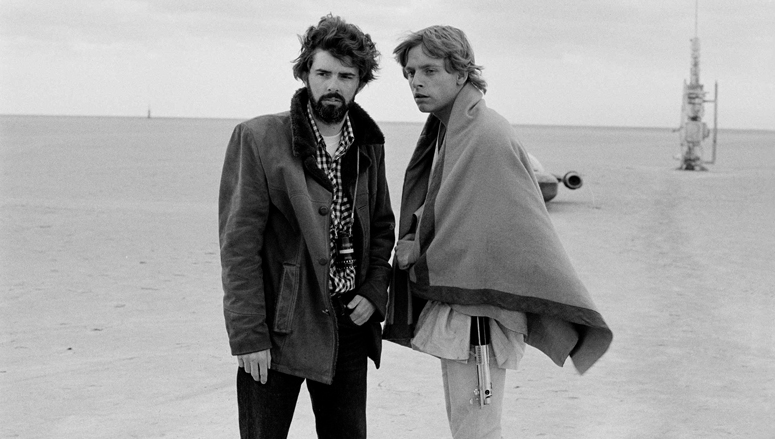 History can be debated, but the general feeling of any time can be seen in its art. Many iconic 70s films (perhaps cinema’s greatest decade) are hopelessly bleak. American film found its way out of the constraints of the studio system and the content-censoring Hays Code with a new batch of filmmakers fully immersed and trained in film. These so-called “movie brats” stood at the center of the New Hollywood era , who shattered and rebuilt studio film expectations.

The key to understanding this era of American film is that it wasn’t about destroying the past. Instead, the movie brats had a tremendously deep understanding of film history and rebelled with that knowledge guided by purpose. The Godfather is about as classically filmed as you can get with precise wide compositions and a montage pulled from Eisenstein, except for that rich, almost-too-dark photography and cynical ending. Bonnie and Clyde might be the start of this movement, a film in which the two protagonists—despite their status as robbers and murderers—were filmed like heroes. Their sexiness and swagger came alive on screen even as their doomed fate drew nearer. Taxi Driver concludes its bleak bloodbath with an epilogue so shockingly critical my mind somehow erased it from my memory after my first viewing. Chinatown brings noir to the bright southern California sun, but ends in a dark, dark night. Look at all the bitterness and cynicism!

A New Hope taps into the deep recesses of our mind where we know that great things are possible despite the horrors and doldrums of daily life.

Eight years after Bonnie and Clyde, Spielburg gives us the first blockbuster with Jaws. Ten years after Bonnie and Clyde, Lucas changes the world with Star Wars. Or A New Hope, as we call it today. If the rest of the movie brats picked and pulled from film history only to subvert it toward their own visions, Lucas practically dumped his inspirations into a cinematic collage.

The opening crawl of A New Hope is taken from early serials like Flash Gordon. Samurai and Western films were two other genre inspirations. Nevertheless, A New Hope looked completely original by constantly undercutting familiarity with originality. The immensity of that Star Destroyer that never seems to end is an awe-inspiring visual statement. We’ve seen seedy bars, but not like the Mos Eisley cantina with that music and those aliens. We know about ancient mystical swords, but they’ve never made noises like that before. A New Hope fits Joseph Campbell’s monomyth structure like an old glove but never stops surprising us. 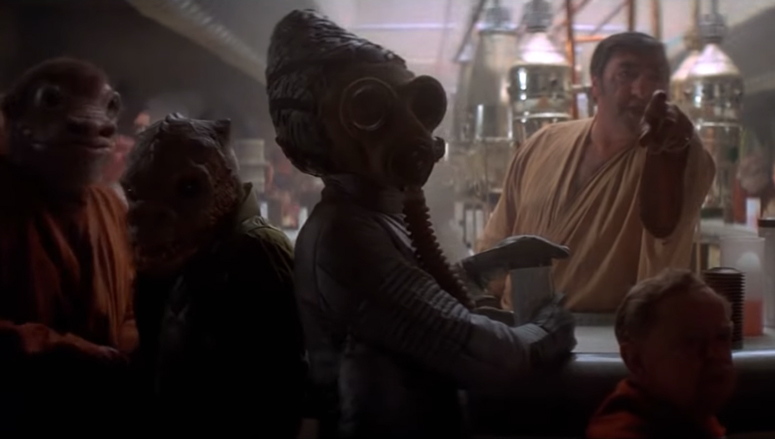 We can talk about the significance of a film where a rebel force battles an evil empire in the wake of the Vietnam War, but Lucas cares more about the audience identifying with Luke: a typical teenager thrown into a conflict well beyond his understanding. In an interview with Biography, Lucas said, “The reason I’m making Star Wars is that I want to give young people some sort of faraway exotic environment for their imaginations to run around in. I have a strong feeling about interesting kids in space exploration. I want them to want it. I want them to get beyond the basic stupidities of the moment and think about colonizing Venus and Mars. And the only way it’s going to happen is to have some dumb kid fantasize about it—to get his ray gun, jump in his ship and run off with this wookie into outer space. It’s our only hope in a way.”

Luke’s story is the stuff of children playing on the front lawn. The beautiful princess, the magical elder guide, mystical powers, and no one telling us all of this is too far-fetched. It taps into the deep recesses of our mind where we know that great things are possible despite the horrors and doldrums of daily life.

Lucas separated from his movie brat peers by shining a different light into the darkness of the times. Instead of illuminating the world’s ills, he cut through to find the promise beyond.

When I remember A New Hope, I think of striking images with the aforementioned opening shot of the Star Destroyer coming to mind. There’s the dark, futuristic bridge on the Death Star where Leia and Tarkin verbally spar. As competent as she is, she can’t help but peek past him to peer at her home planet of Alderaan, which drifts into the crosshairs of a large window. The Empire shows the extent of its villany, but we know Leia will be strong.

Then there’s the attack on the Death Star’s trenches where Lucas seamlessly switches between two shots (disguised by a flash of turret fire) to give us a POV (point of view) dive into the trench. The pure adrenaline of this shot is exceptional. The audience dives into the madness alongside Luke, like we’re putting ourselves at risk to fight evil, but we know Luke will be strong. 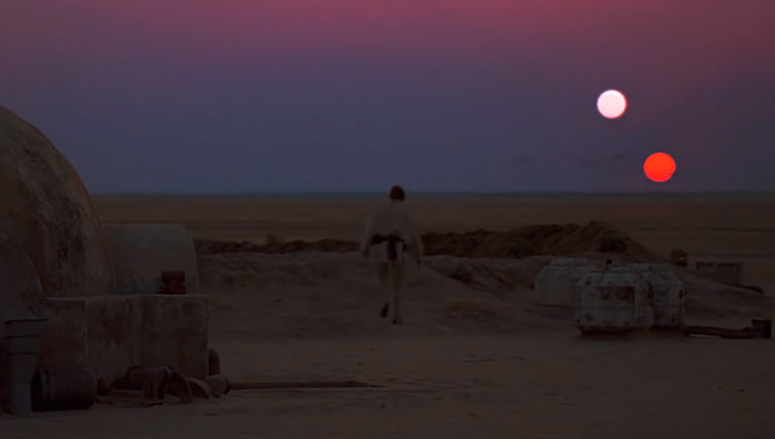 Hope is visually perfected in the scene where Luke finishes the day’s chores and walks up a hill to view the twin sunset. John Williams’ score swells as Luke dreams of a better life. He doesn’t know what awaits him, but we certainly do. We know that adventure awaits—peril and heroism, sacrifice and victory. In this moment of filmmaking perfection, there is hope.

Star Wars didn’t save culture by any means but identified a saving grace. The inevitability of the story is part and parcel for what makes the story great. Lucas separated from his movie brat peers by shining a different light into the darkness of the times. Instead of illuminating the world’s ills, he cut through to find the promise beyond. When we see truth in the cynicism of many 70s films, we see a truth rooted in humanity’s evil. When we see truth in A New Hope, we see a truth rooted in our redemption.