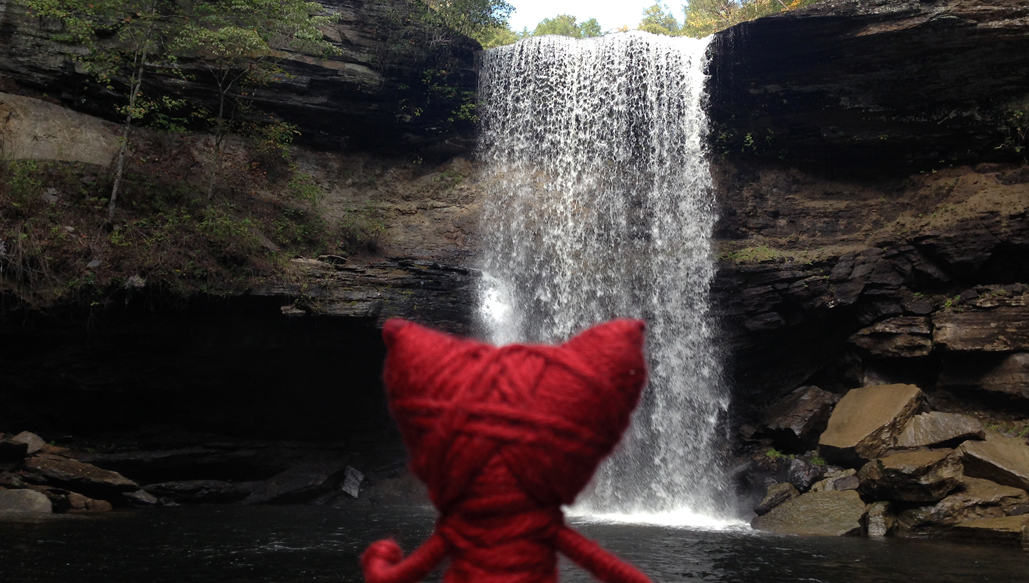 Seeing the World Through Yarny’s Eyes in Unravel

“Here,” my friend Jonny said. “I found him while I was cleaning out my room and I thought you’d appreciate him.” He handed me a six-inch doll wrapped in red yarn with bright, white knots for eyes. It was a Yarny of my own.

At that time, I was about halfway through Unravel—a puzzle platform game featuring the red doll, who explores a large world looking for lost mementos. His world is beautiful but perilous, forcing him to unravel his body’s thread to overcome large obstacles such as mosquitoes, birds, and shallow water. 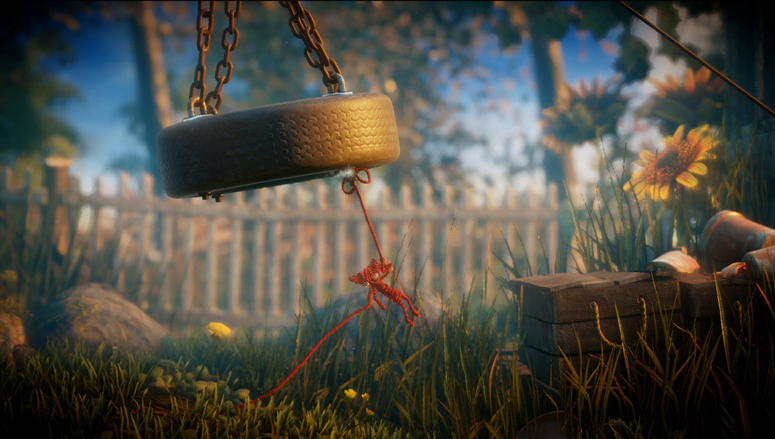 The day Jonny gave Yarny to me, we were visiting some mutual friends near Nashville for a conference—friends who had a happy, energetic, and potentially destructive toddler who was reaching for Yarny as soon as he saw him. Given that the toy looked about as delicate and likely to unravel as the game’s version, I stowed him in my backpack for safekeeping.

The next day I was on my own waiting for conference registration to open. The host church had set up a tall grass maze for a harvest festival the weekend before, and since I had an hour to kill on this nice day, I went exploring.

My natural tendency after a long day at work is hiding away at home to isolate myself and avoid responsibility. By contrast, Yarny’s preferred environment is the outdoors, so when I get into my car on a sunny afternoon, he tangibly reminds me to go out and enjoy nature.

It was a perfect afternoon that was sunny and warm with a light breeze rustling the tall grass. With the exception of a few lazy bees and moths, I had the maze to myself. It reminded me so much of the earliest, gentle levels of Unravel that I could almost hear the soundtrack in the chirping of the birds, as if I were being invited to sit still and observe a Yarny-sized world go by.

And then I realized I had Yarny in my backpack.

I pulled him out and set him down carefully in the path to take a photo. And thus, by the happy accident of simply having Yarny with me on a nice day, I began a personal practice of going on adventures with him at my side. 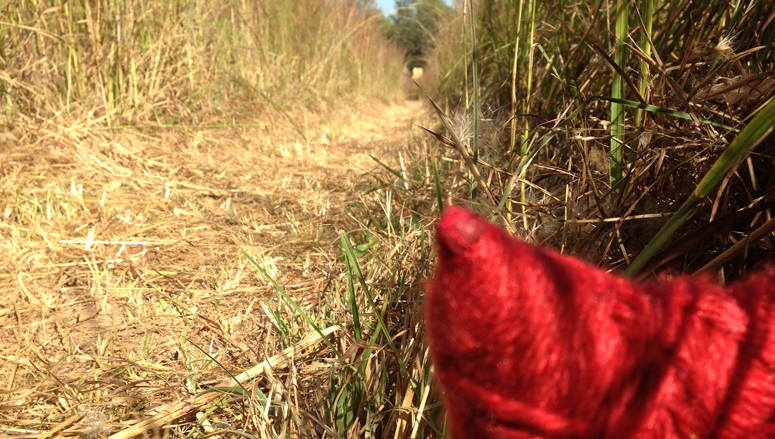 Yarny mostly lives in my car, and it’s been incredibly good for me to have him there because he reminds me to explore the outdoors. My natural tendency after a long day at work is hiding away at home to isolate myself and avoid responsibility. Then my gaming habits will easily slip from healthy recreation and relaxation into laziness and obsession. By contrast, Yarny’s preferred environment is the outdoors, so when I get into my car on a sunny afternoon, he tangibly reminds me to go out and enjoy nature. Sometimes I’m encouraged to take a different route home from work or stop at a park, and every few weeks, I’ll grab him after church and we’ll walk the mile loop in the woods behind the building.

Yarny not only reminds me to go outside on occasion, but he also helps me look around for the details and variety in nature. He is small enough that little things suddenly become large—fungus on a downed tree becomes a chair; a fence becomes a ladder; Spanish moss becomes a tangle of vines. I have noticed more details in the changing seasons, like unfurling ferns and trillium in spring and little white blossoms that bud into wild strawberries. In late October, the light filters through the changing leaves like stained glass, and among the thousands of leaves paving the path with gold, I once found the tiniest leaf: a perfect miniature for Yarny to hold and treasure. I marveled at the wonder of it all. 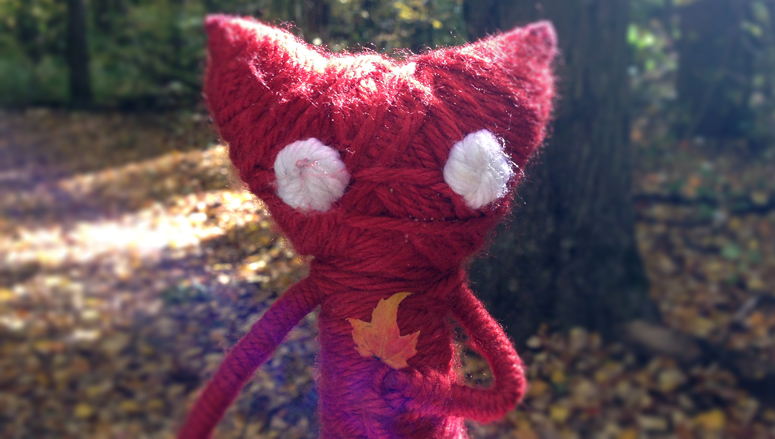 Yarny’s favorite discovery: a perfect, Yarny-size maple leaf in the woods behind my church.

But I found a greater gift in traveling with Yarny. In enjoying the quiet solitude of the woods, watching the waves crash against a lighthouse, or lying on a shaded pier with manatees slowly drifting by, I have been confronted by my own smallness and God’s grandness. Ferns unfurl in perfect fractals; the tiniest flower differs in leaf count or petal shape from its neighbor; a downed tree becomes a home for worms and beetles and chipmunks and snakes. These are the handiwork of a God who created the sun, moon, and stars, yet also knows when every sparrow falls and the number of hairs on every head.

Illustrator John Hendrix often points out that beauty is fundamentally useless and the beauty in nature is particularly wasteful. How many flowers will blossom and die without ever being seen? Even still, God delights in it all. He never preserves the perfect sunset because he wipes it clean and creates a new one every day. It’s so easy to fall into apathy and routine by pushing through the workday, attending personal obligations, and driving home on autopilot until it’s time to sleep. But God’s mercies are new every morning, and sometimes I need a little nudge (like having Yarny in the car) to see them. 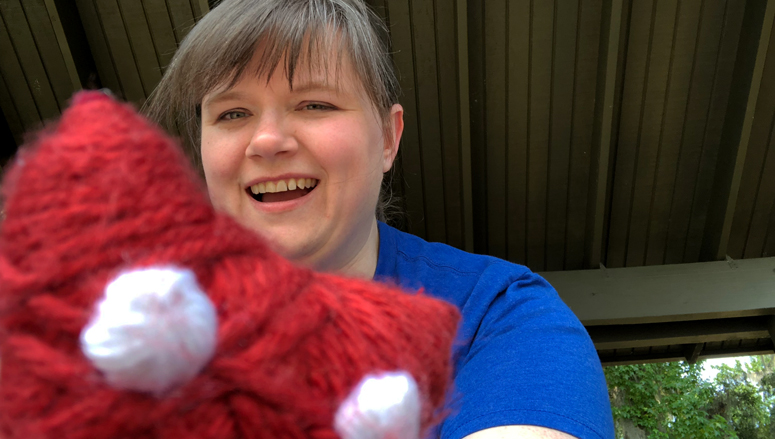 Yarny and me on a river dock in Jacksonville, Florida, shortly before seeing wild manatees.

Yarny is starting to fall apart now. He’s gotten dirty from sitting in snow, sand, and random branches. I’ve had to wrap one arm multiple times, and in retrospect, I’ve probably done more damage to Yarny by taking him on adventures than he would have received at the hands of my friend’s toddler. But that’s okay. A little damage to Yarny is worth remembering that there’s a beautiful world out there that was made to be enjoyed.