Searching for Justice in Watchmen

Spoilers for the graphic novel Watchmen are discussed throughout this article.

“Joking, of course,” Rorschach says to the world’s most renowned superheroes. One in their midst, Ozymandias, has proudly claimed responsibility for committing war crimes to end the Cold War. Breaking the laws of nature and common morality doesn’t begin to describe the extent of his brilliant yet mad schemes to bring about world peace. With Russia and the United States on the brink of nuclear fallout, he teleported a monstrous creature to New York that died and unleashed a devastating psionic wave that killed half of the city’s population upon arrival. It’s no joke.

The stunt was so convincing in its execution that the nations were fooled into uniting against this extraterrestrial, common enemy into the foreseeable future. Most of the heroes are aghast from this revelation, but all agree that it’s best not to expose Ozymandias. Otherwise, his illusion would shatter, and why compromise peace out of spite?

Rorschach’s main failing is his narrow definition of justice, which—deserved as it may be—doesn’t leave room for due process or forgiveness. Rorschach lives by a strict Levitical code: eye for eye, tooth for tooth.

Ozymandias tells them he has given humanity its first, real chance to cleanse itself of evil because when “you usher in an age of illumination so dazzling…humanity will reject the darkness in its heart.” Rorschach refuses to entertain the existence of any utopia without holding Ozymandias accountable, but he stands and dies alone in this conviction. His life was built upon achieving justice just as much as Ozymandias’s life was, but who pursued it correctly? Watchmen is an interrogation of how its characters’ efforts to pursue retribution are incomplete and flawed to varying extents, leaving readers to wonder where true justice can be found.

The events of the graphic novel unfold only because of Rorschach. When he finds out that a fellow “hero” named Comedian is mysteriously murdered, he’s instantly on the case, following every lead he can get and checking in on every other hero. They have all retired from costumed crime-busting since the government made it illegal, but Rorschach neither gave up the profession nor turned inward since there was no rest for traffickers and rapists; he wouldn’t remain idle when ineffective law enforcement and apathetic heroes couldn’t or wouldn’t do anything. 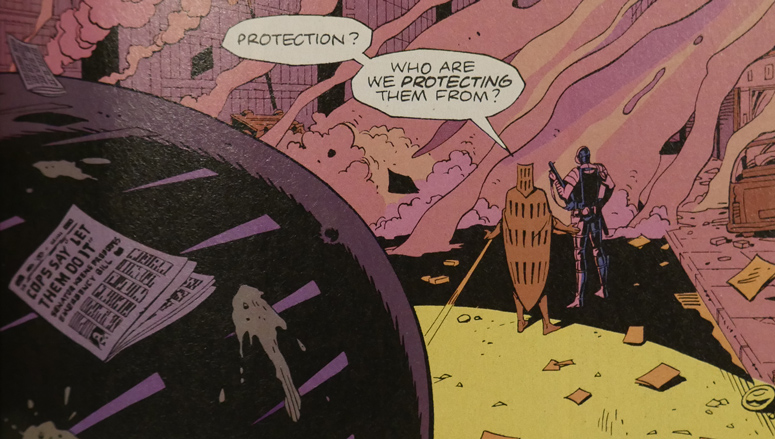 Comedian was no saint to be honored, though. He sold himself out for mercenary work as an excuse to feed his lust for violence at the expense of others—both evil and good. Watchmen insinuates that other heroes had ulterior motives as well, under the guise of saving lives, but Rorschach’s motives are seemingly the most genuine. Rorschach respects Comedian since he “Understood man’s capacity for horrors and never quit” just as he did, but Rorschach refused to respond to evil with amoral indifference. “Why does one death matter against so many?” Rorschach reflects in his journal. “Because there is good and there is evil, and evil must be punished, even in the face of Armageddon I shall not compromise in this.” Rorschach believes that “Nothing is hopeless. Not while there’s life.”

However, he’s hypocritical in his mission of clear rights and wrongs when he’s already a nihilistic cynic, understandably so from not only a traumatic childhood, but also a lifelong career of seeing and combating the worst of humanity. He also makes homophobic and ableist remarks, even excusing rape in one circumstance as a “moral lapse.” However, his main failing is his narrow definition of justice, which—deserved as it may be—doesn’t leave room for due process or forgiveness. Rorschach lives by a strict Levitical code: eye for eye, tooth for tooth.

Jesus desires that His people love their enemies and always listen to and care for the oppressed by loudly proclaiming His principles as the strongest advocates—not arbiters—of justice.

His hands-on approach doesn’t consider the necessity of dealing with deeper societal and cultural issues that contribute to crime. These are exactly what Ozymandias seeks to control from the shadows, criticizing heroism for cutting evil at the root, which is why it always grew back, stemming from the same old problems with new faces. However, Ozymandias is naïve to forget that trees spread seeds. Digging up the root may stifle evil for a time, but when the tree itself is made of evil, it will inevitably sprout anew. He believes evil can be fixed with intellect, and Rorschach believes it can be fixed by force. But neither understand that “The heart is deceitful above all things, and desperately sick; who can understand it?” (Jer. 17:9)

Despite author Alan Moore’s intention to make Rorschach entirely unappealing, he’s still the most honorable hero in the story. To have strict standards of good and evil is important, but there’s someone who does it better. God is more obsessed with justice and—unlike Rorschach—is the only one worthy and perfect enough to define and see it out, desiring for the righteous to be vindicated and the wicked scorned. He encourages the protection of orphans, widows, and other vulnerable groups. But God does not want His followers to carry out justice for themselves or fight evil with evil. He wants His people to be defined by peace (Rom. 12:17-21). This doesn’t mean that they should stand idly by when they see injustice; rather, Jesus desires that His people love their enemies and always listen to and care for the oppressed by loudly proclaiming His principles as the strongest advocates—not arbiters—of justice (Matt. 5: 38-45). 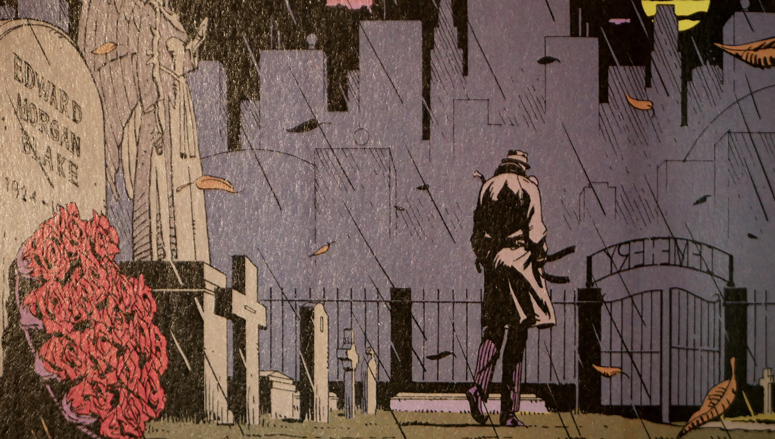 “It ain’t fair!” a newsstand merchant laments in Watchmen. “We didn’t ask for no war. There’s no justice in this world! All this craziness goin’ down, the ordinary guy got no protection. Like a turtle with no shell. He’s all washed up! I mean, at least those super guys tried to protect folk. Maybe we shoulda listened. Maybe they had a message, y’know?”

The heroes did have a message, even if it was delivered in pieces through broken people. The message is that we long for justice because it is holy, but when we take it into our own hands, our ideas of it can fall short in conception and execution even with good intentions. A godlike hero in the graphic novel named Dr. Manhattan says as much to Ozymandias after he asks him if he’d done the right thing. Dr. Manhattan said, “Nothing ever ends.” So while evil may persist, God’s unflinching commitment to justice should motivate us to pursue justice for the people around us, particularly those who’ve been denied it. Doing so, however, requires drawing close to God’s heart, lest we pursue a justice made in our own image.