There’s a relatable meme to scroll over every day. An uplifting message, a cute cat picture, a heartwarming piece of news—these moments of respite are frequent enough amid the chaos of the internet. But there are rarer moments that cut through all sorts of barriers to unify people around something that speaks to millions of hearts. It’s safe to say that Steve Burn’s video clip addressing his exit from the children’s show Blue’s Clues in 2001 is one such example, having garnered over two million favorites on Twitter at the time of this article’s publishing. Love Thy Nerd’s community welcomed Steve’s wonderful message with relatively enthusiastic emotion, and some of our writers have gotten out their Handy Dandy Notebooks to pen some reflections on why the show has and continues to resonate with its viewers.

So about that time Steve went off to college… #BluesClues25 pic.twitter.com/O8NOM2eRjy

A Legacy of Self-Worth

My daughter and I watch an episode of Blue’s Clues almost every day. After recently watching an episode for the first time in decades while babysitting my nephews, I knew I had to share it with my child as well because of the show’s amazing pedagogical processes and age appropriate engagement.

Many memories have flooded back in rewatching Blue’s Clues, but I have this one very clear memory of watching it for the first time. I was sent home from school sick, which—in those days before we had entire networks dedicated to twenty-four-hour children’s programming—meant that I actually got to watch this new show I’d been hearing about. Little six-year-old me was jumping up and down and yelling about clues so loudly that my grandmother came in to make sure I was okay. I was fine but Steve needed my help and I had to be there for him. This became sort of a model for the kind of engagement and ownership of learning that I tried to foster in my own classroom years later, the kind where children believe their contributions are so vital they can’t help but get excited.

I’m smiling even now as I remember that little girl’s joy, her sense of purpose. I remember feeling important and smart and necessary. I had a role to fill and it was AWESOME! I wasn’t watching the show anymore by the time Steve left, but I heard about it all from my younger cousins and nieces and nephews. I felt their loss with his departure because he was more than just a character on TV; he was a friend who had made them feel valued. So when Steve Burns came back recently and made that online video, telling us we’d continued to help him and that we looked great and he’d never forgotten us, it moved me. He knew he was more than just an actor. He had been a teacher, mentor, and friend who inspired a sense of self-worth and courage in generations of hearts. And he decided to do it again and remind all of us of the children we used to be, and the joy we used to feel, and most importantly, that we matter. Thanks for that, Steve. 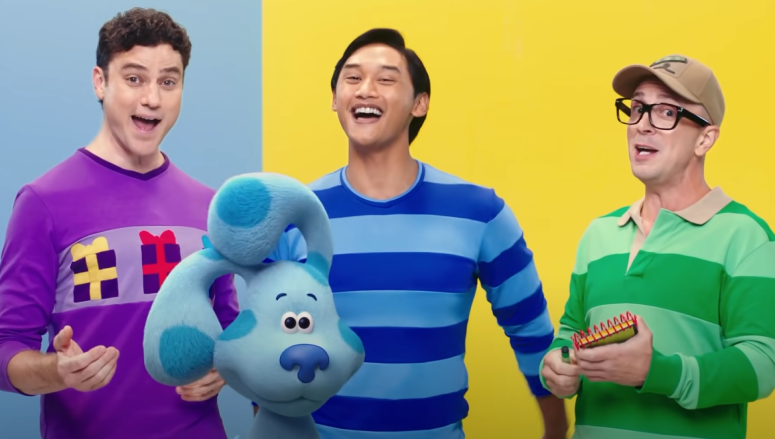 A Legacy of Curiosity

Sadly, I fall between the two times Blue’s Clues has been on the air. I was born during the initial run with Steve, and the new Blue’s Clues and You! show premiered during my junior year of college. Besides, my parents didn’t get Nickelodeon when I was a kid, so does this mean that the show has no impact on my life? Absolutely not.

I remember watching some episodes when visiting my grandparents, along with many other children’s shows that they had on VHS. Steve and Joe were so enthusiastic about following their trails of clues that I still remember bits and pieces years later. (Paprika and Magenta are still my favorites.) Cultivating a sense of curiosity when I was young helped build me into the person I am now. I learned to ask questions, to dig deeper, to observe the world around me.

In the years since the original show ended, references to it kept popping up. Articles and videos came up about how Steve started to go bald after he left the show. It got me to pause and reflect on that show, and how characters on TV are people who have anxieties just like me. When the new video from Steve apologizing for leaving and saying he’s proud of us dropped … it hit me like a truck. I’m in grad school now, facing a lot of expectations and stress, so having a man who was a very small sliver of my childhood say he was proud meant a lot. Steve, Joe, and Josh, thank you for inspiring a spirit of curiosity in my generation and in generations to come.

When I eventually left for college as Steve had before me, these lessons would prove some of the most vital in adapting to and thriving in a new environment. All these years later, I and an entire generation are still reminding ourselves to “use our minds” and “take a step at a time” to do what we want to do.

A Legacy of Problem-Solving

Blues Clues may be responsible for starting my fascination with children’s media. Being a bit older than its target audience when it first aired, it was the first show I remember appreciating for its structure as a production. I would tune in to Blue’s Clues not so much to find out what would happen, but rather how it would happen. Even still, seeing past the theatrical façade made me no less susceptible to the show’s charms, or its lessons.

At the heart of each episode was a mystery to solve, but the solution never relied on Steve’s knowledge or some ability that made him uniquely equipped to solve Blue’s Clues. The solution was a process that anyone could learn and use, even once the episode ended. The three pillars of that process, which I learned long before I had vocabulary to define them, were scale management, community, and intentionality.

Steve and Blue taught me how to take a challenging problem (like trying to guess what your dog is saying) and break it down into smaller, more manageable parts (like finding a clue and drawing it in a notebook). Solve enough little problems and you’ll eventually solve the big one too. If a problem is particularly challenging, you can always ask your friends, too. Community is important for gaining new perspectives that might just spark a solution you wouldn’t have arrived at on your own. And finally, intentionality defined Steve, who was always dedicated to solving Blue’s clues but was present and in the moment if a friend needed help. The clues would still be there for him afterward.

When I eventually left for college as Steve had before me, these lessons would prove some of the most vital in adapting to and thriving in a new environment. All these years later, I and an entire generation are still reminding ourselves to “use our minds” and “take a step at a time” to do what we want to do—and still singing the Mail Song every chance we get! We may not have seen each other for years, but Steve, Blue, and all the rest—you never left us. 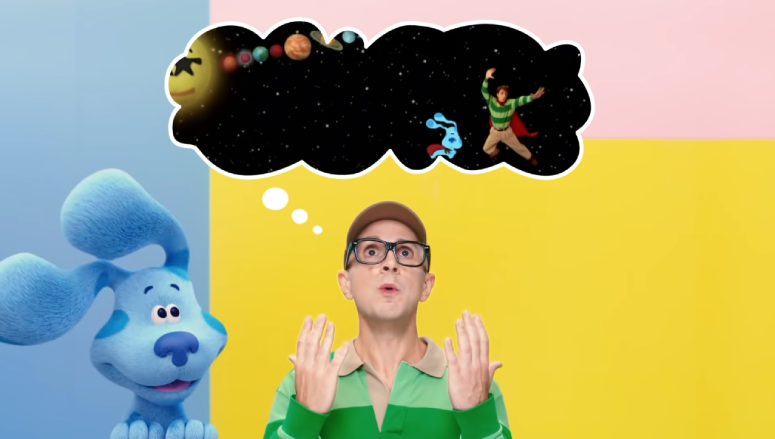 A Legacy of Friendship

I was a prime target for Blue’s Clues. Being two years old when the first season premiered, I remember Steve and Joe being a huge part of my childhood. When my sister was born and old enough, we watched the show together with my mom. I owned a Handy Dandy Notebook, and my sister and I even had birthday parties themed after the show. It brought me closer to my family, and it’s no wonder because Steve was all about family in a manner that may have subtly shaped how I define it.

Steve lives with Blue, but when you count all of his anthropomorphic house items, the number of friends quickly balloons to a dozen or so—a number that only increased with new characters over time. I distinctly remember there being episodes with story arcs that built up to meeting new neighbors like Magenta and Periwinkle, welcoming newborns into the world like Cinnamon (the child of Salt and Pepper), and making new hosts like Joe feel at home. No matter where someone came from or what they looked like, everyone was always brought into the fold of the Blue’s Clues family with eager and open arms. Steve and friends always put any social reservations aside of any characters (and the audience) with grand celebrations dedicated to new faces.

Relationships are difficult. Everyone experiences shyness and social anxiety at some point, and Blue’s Clues acknowledged these things in its own ways by teaching a generation to adopt a spirit of friendship, for what arises from that can create lifelong, life-giving bonds that infinitely outweigh the cost of overcoming social fears. Thank you, Steve, Joe, Blue, and others, for having such a positive impact on my development. Mister Rogers would be proud of what you all accomplished, too.