Parenting and Protection in “The Passenger”

I made scrambled eggs for breakfast right before watching Episode 10 of The Mandalorian.

This, it turned out, was relevant. “The Passenger” is, after all, centered on eggs. Specifically, Frog Lady’s eggs, but they serve as a stand-in for vulnerable children, born and unborn, and the adults who protect them.

That’s one of the overarching threads of The Mandalorian in general. The story of the first season is the story of Din Djarin and the Child becoming a family.

“The Passenger” hones in on this theme as it tells the story of three parents. First up is Mando himself. In the episode intro, Mando is attacked by would-be kidnappers. When one of them snags the Child and holds a knife to its throat, Mando offers anything the kidnapper wants in exchange for the Child’s safety, even nodding towards Boba Fett’s armor, which he had just acquired. Of course, the kidnapper doesn’t keep his prize—Mando’s jetpack—for long. Still, it was touching that Mando was willing to sacrifice it for the sake of the Child, albeit briefly.

The central parent in the episode is Frog Lady, an amphibious alien who barters for safe passage at sub-light speed to a different planet one sector over in exchange for the promise of information about another Mandalorian enclave. She brings along a clutch of her own unfertilized eggs, which have to travel sub-light or they’ll be destroyed. Unfortunately, her eggs are in danger from an unexpected threat: the Child, the precocious Baby Yoda himself, who sees them as a tasty treat.

Many of the people I talked to commented that they were at least slightly disturbed by this. Eating one egg was wrong but at least understandable and darkly humorous. After all, the Child is a toddler, and toddlers are not known for their rational decisions. They have a basic understanding that when Mom or Dad say no, they’re not supposed to do whatever they’re doing, and then they willfully test the boundaries anyway. But there’s a difference between stealing another cookie from the cookie jar and stealing the promise of babies from a hopeful mother. His continuous success shifts it from cute to disturbing. 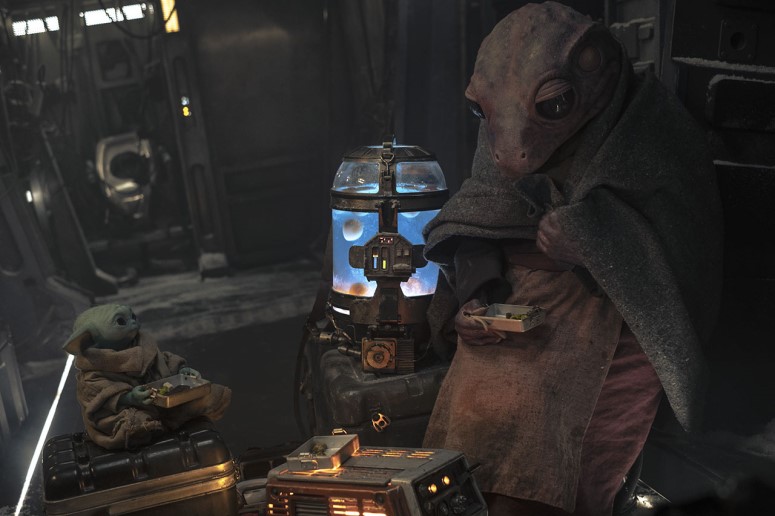 It just gets worse when Frog Lady hacks the voice box of the destroyed droid Q9-0 and informs Mando that the unfertilized eggs are her last clutch. She is too old to produce more, and if she doesn’t get them fertilized by her husband in time, these too will be lost.

This is a powerful moment—more powerful, I suspect, than the directors realized. Because the female body is built to carry children and because of millennia of cultural expectations, most women want, or at least plan, to be mothers. We have a literal monthly hormonal wash of emotions and biological reminders that we, too, carry a limited number of eggs in our bodies.

Becoming—and staying—pregnant is not always as simple as it sounds. Rough estimates say that up to 25% of pregnancies end in miscarriage in the first trimester, and it’s true; as my own friends start families, I’ve seen a surprisingly large number grieving the loss of deeply-wanted babies, and I know more than a few families who had to either seek medical help in getting pregnant or have learned that they will be unable to carry a baby to term at all. And it gets even more complicated for those like Frog Lady—and myself—who approach 40 with no kids of our own. The chances of complications in pregnancy, as well as health risks to the baby, increase the older a woman gets.

In other words, Frog Lady’s concerns are very real. This is her last chance! Her husband has finally found a planet that’s hospitable to her kind, and she can finally raise the family she always wanted. But only if her eggs make it through space safely … and aren’t eaten by the Child first.

But there’s a difference between stealing another cookie from the cookie jar and stealing the promise of babies from a hopeful mother. His continuous success shifts it from cute to disturbing.

Frog Lady never realizes that the Child poses a serious threat to her eggs, but we do get a hint of a possible reaction with the final parent in this episode. Chased away from Frog Lady’s clutch, Baby Yoda despondently wanders off… towards another, much larger clutch of eggs. These, it turns out, are not only fertilized but are at the end of their gestational cycle. Right after the Child breaks into one egg and eats one, the rest hatch, and they and the mother spider chase and attempt to destroy the invaders.

We are not meant to feel compassion for the giant spider. She is not sentient, just an instinctual killer, so the relief is palpable when the spiders are destroyed. Still, who can blame her for attacking? Her clutch faced a very real danger, and she and her brood acted on instinct to eliminate the threat. This is what a good parent does. Mando himself has acted time and again to protect the Child. Even Frog Lady uses a pea shooter to kill a few of the spiders. That we cheer when the spiders die says more about the survival of the sentients than it does about the spider’s responsibilities as a mother.

The episode ends with Mando and the Child back on their way to deliver Frog Lady and her precious eggs to her husband (with one final awkward slurp from the Child for good measure). My own expectation is that Frog Lady’s story is more or less over as far as the show is concerned. I don’t know if Mando learned anything from this. The Child certainly doesn’t seem to have. But we can. Children, and especially babies, are precious and vulnerable, and no matter whether we personally desire to be parents or not, we all would do well to treat them as such.