“Do you wanna be my friend?”

It was 1000 episodes ago that first time viewers of One Piece were asked this question sprinkled into the series’ original opening song, “We Are.” These words helped set the tone for all the episodes to come, as the pirate captain Monkey D. Luffy began recruiting men and women to achieve his dream of becoming King of the Pirates, which for him, means being “the freest man on the sea.”

For 2000 years, a man named Jesus asked his followers a similar question: “Will you follow me?” To some, this is a terrifying thought. This kind of devotion to Christianity or any cause can seem dogmatic, showing all the things we’re supposed to do and not allowed to do. It can feel like an attack on our ability to freely live our own lives. But like Jesus, Luffy demonstrates a different model of freedom to his Straw Hat Pirates crew, because it’s combined with his desire to be a friend. He doesn’t care only about his own freedom, but also the freedom of those he cares about. And this creates an interesting dichotomy in One Piece. By letting someone else be the captain of their lives, they find a freedom they could never have found on their own.

But like Jesus, Luffy demonstrates a different model of freedom to his Straw Hat Pirates crew, because it’s combined with his desire to be a friend. He doesn’t care only about his own freedom, but also the freedom of those he cares about.

A Freedom from Burden

When we’re introduced to Nami, she has dreams of being a navigator and cartographer who will draw the first map of the entire One Piece world. When she meets Luffy, she watches him defend a town from a truly evil pirate, Captain Buggy. Luffy, meanwhile, comes to like what he sees in Nami, and decides she will be his Navigator. Nami decides to join him, but around a dozen episodes later, reveals she had always intended to doublecross Luffy and the other Straw Hats, making off with their ship and money. Zoro, the most senior member after Luffy, suggests they let her go and move on from her. But Luffy is adamant. No one else but Nami will be his navigator.

So the crew pursues Nami to her hometown, where they learn she hates pirates and goes on voyages to steal their treasure. Her home island had been subjugated by the pirate Arlong and his crew, and Nami was forced to make maps for him as nothing more than a slave. If she refused, Arlong would have murdered her entire town, including her sister. He had already murdered her adoptive mother, so Nami’s only hope was to collect 100 million of the One Piece world’s currency to buy back her town from Arlong, who promises to honor the deal “however long it takes.” After her haul with Luffy, she’s now one voyage shy of achieving that goal, and she’s carried those lives on her back by going it alone. 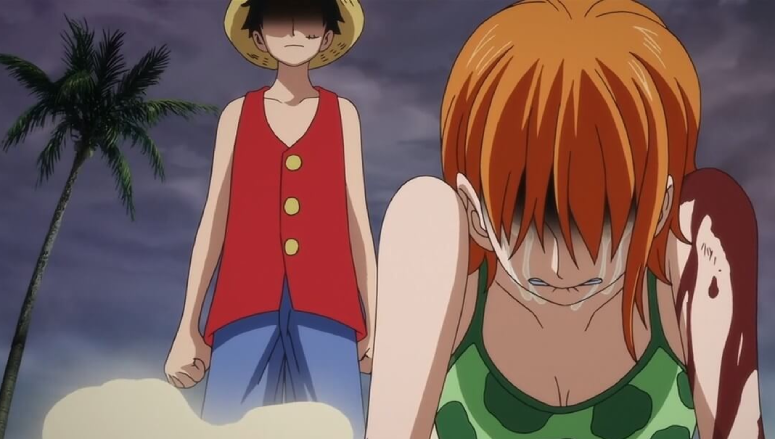 And then, Arlong takes everything from her under sly pretenses, going as far as to gleefully ask her how exactly he broke his promise, leaving Nami with the realization all her years of working and putting her life on the line have left her with nothing. When the whole town hears about this, they say enough is enough, and Nami will no longer have to keep struggling and suffering for their sake. They decide to fight, even though everyone knows, including Nami, it will mean their deaths. Nami can only watch helplessly as her people run to fight the pirate in Arlong Park, and she turns to stab her arm that carries the tattoo brand of the Arlong Pirates flag. As she raises the knife yet again. A hand stops her. Luffy’s hand.

She’s tried to have him leave her island multiple times. She shouts again that she doesn’t want him; she doesn’t need him. She begs him to just go away. But Luffy stays, fixating on one single truth. His crewmate, his friend, is in tears and in pain. For eight years, Nami believed it fell to her to keep her townspeople safe, going on dangerous voyage after dangerous voyage in hopes to buy back her town from a seemingly insurmountable force like Arlong. Except, there was a man, one who had taken down other powerful pirates before her very eyes. He had the power to do what no one else could, and was always ready to fight for his friends in need. She no longer needed to bear it all on her own. She only needed to ask one thing … 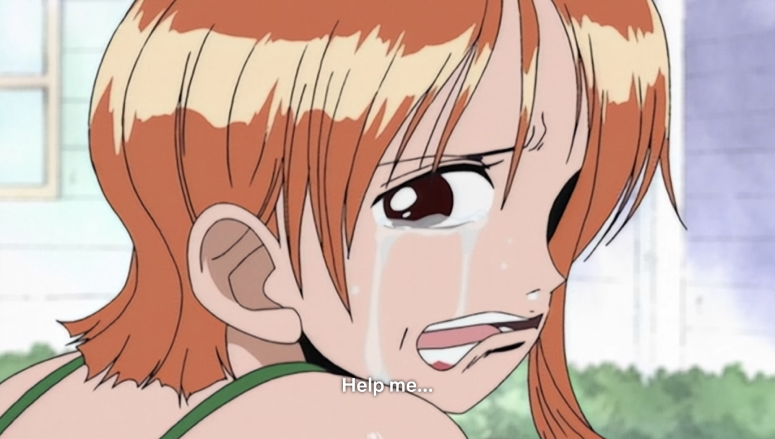 Luffy places his treasured hat on her head to comfort her, then gathers the remaining crew to march as one to Arlong Park, ready to fight for their crewmate and her people. When they finally defeat Arlong, Luffy rises and shouts, “Nami! You are my friend!” And for the first time in eight years, she is free from her oppressors and burdens, thanks to the efforts of a captain ready to share the burdens she carried alone for so long. What she could not do herself, he would do in her place so she could finally live the life she wanted for herself. And she decides to pursue it alongside the person who forgave her, befriended her, and treasured her.

A Freedom to Live

In the world of One Piece, the world is run by a corrupt government, ravaged by evil pirate emperors, and filled with naval officers who enforce a form of justice that lacks mercy. Through series creator Eiichiro Oda’s writing, we experience flashback narratives of characters major and supporting. Like Nami’s, we see unbearable burdens that have either been placed on them by others, or they have chosen to carry themselves, from fears of always being alone, shame from their past actions, or even the utter despair of believing they don’t deserve to live.

One Piece is still an adventure story in a fallen world, in ways like our own. But in both cases, those that join these men find something even greater. Once the burdens are lifted, and the shame and guilt leave us, we find something that can never be taken from us. We find our freedom to live as we were meant to.

In a world such as this, there may be no greater words in this world than to hear Luffy ask, “Will you join my crew?” Those that answer “yes” lose some autonomy in their lives. Nami will navigate the ship, but Luffy decides their next destination. The crew all have a say on the actions they take next, but it is always Luffy’s decision in the end. Without the context of the story, that sounds like a lot to give up.

But as we see the story play out, we come to learn very quickly why they all choose to stay. We need only look to their lives before to the lives now, their past shame, guilt, and burden are all taken from them, and placed on a man named Monkey D. Luffy, who has the strength and endurance to bear it all, just so his friends can keep smiling and live the lives they truly desire. It becomes clear then, that it’s not really about these characters making someone else the captain of their lives. It’s the choice to make Luffy the captain of their lives. Just as it is for those who follow Jesus, those that choose to join are not free from all danger. One Piece is still an adventure story in a fallen world, in ways like our own. But in both cases, those that join these men find something even greater. Once the burdens are lifted, and the shame and guilt leave us, we find something that can never be taken from us. We find our freedom to live as we were meant to. 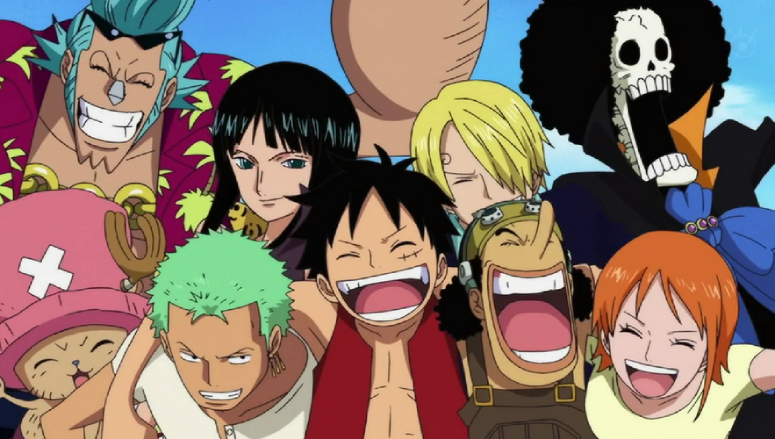