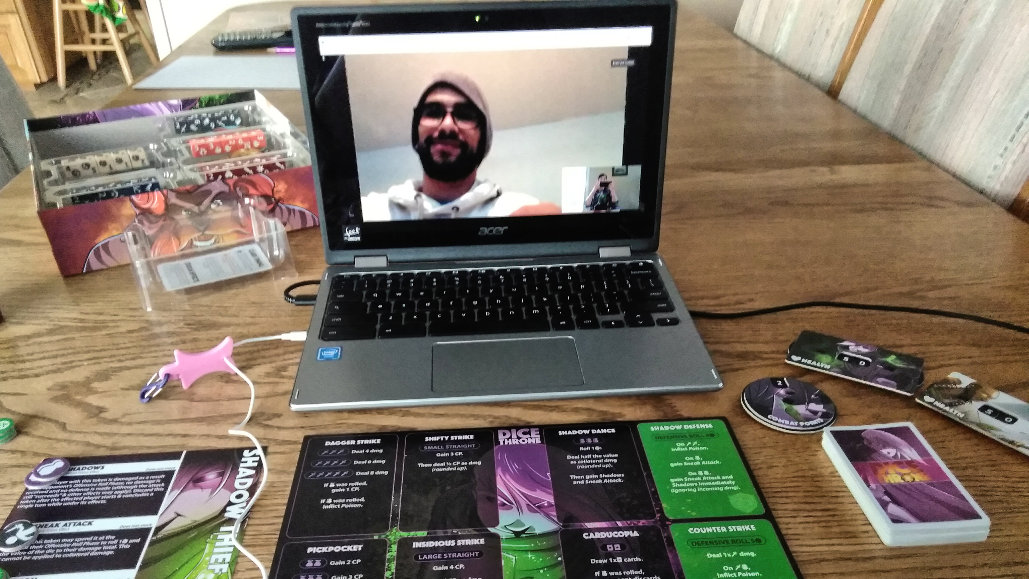 No Local Board Game Group? Play Over Video Chat!

When was the last time you had a game night that you never wanted to end? Do you remember the game you were playing? The food that you ate? For me it was around my dining room table, but there weren’t any other people there with me. Instead, my opponents were looking at me through a computer screen with one of my favorite games, Dice Throne, laid on the table in front of me.

Dice Throne wasn’t the first game that sparked my interest in the hobby. That would be Settlers of Catan. I have a lot of memories of playing around the table with my friends in college—laughing, joking, and winning. (Okay, sometimes I lost, but it was fun nonetheless.) Then I graduated, got married, got a job, had kids… and the moments of board games around the table grew further and further apart.

The best part is that while no one in this group lives in my state, they’ve become some of my closest friends.

Then I stumbled on Dice Throne at Barnes and Noble. Soon after, I found the Dice Throne Facebook community, where someone invited me into a Dice Throne Messenger group. I don’t remember how any of that happened, but I’m very grateful it did. It turned a casual hobby into a passion. The best part is that while no one in this group lives in my state, they’ve become some of my closest friends. A big reason is because we found a game we could play through video chat.

In college my friends and I would play a lot of FIFA, both online as well as in the same room. Of the two, I vastly preferred playing with my roommates in the same room than online with strangers. It’s the same with board games. I prefer face-to-face interaction and being able to play the physical game—moving pieces, playing cards, rolling dice.

Over video chat, I still get the casual gaming feel as if I were playing with them in person, and I have the opportunity to really get to know the person I’m playing with in a way that competing in a fast-paced video game doesn’t allow for. I don’t feel rushed to make quick decisions and we can take long pauses in-between turns to catch up on family, work, concerns. Everything that’s amazing about playing games with my best friends around the table I still get to experience—the other players are just in other states. This has allowed my passion for board games to increase while my circle of close friends has also increased. 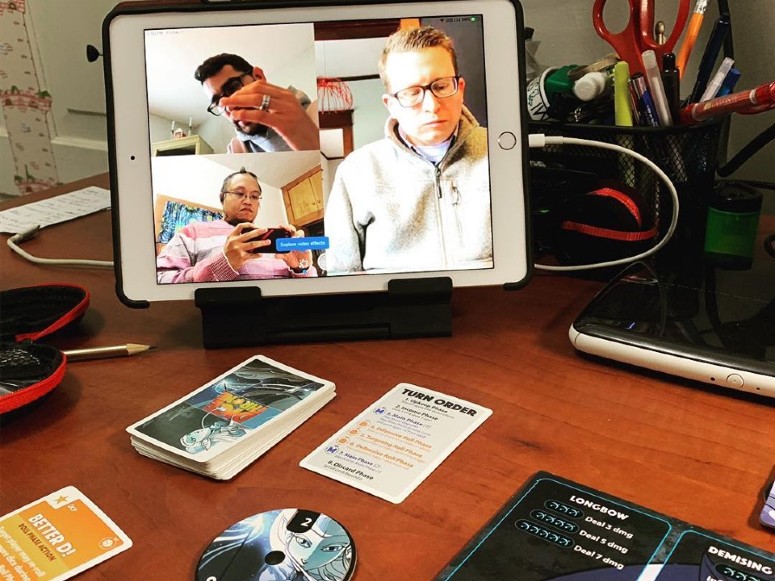 Playing Dice Thone together from China, North Carolina, and Kansas.

I started to talk about my “Dice Club” friends as if I saw them every weekend. I shared stories about them with my wife and she kept asking, “How do you know these people again?” Over the last few months these friends of mine have had babies, changed jobs, lost jobs, and moved to a different continent.

None of this would have happened if we didn’t have the right games to play. So here is my list of games that I’ve discovered work well for playing over video chat (Skype, Discord, etc.).

Games to Play Over Video Chat

Dice Throne —This was the first game I played this way. It works beautifully. Each person has their own board. There are no shared resources or cards you need to worry about. All it takes is two game boards and honesty about your dice rolls, and you’re ready to go. The casual pace of the game helps it not feel rushed. Tip: I have found that the best way to keep track of what the other player is doing is to also set up their player board, health dial, and CP dial on my end. This helps me with my strategy against the other players because it allows me to remember what their options are. 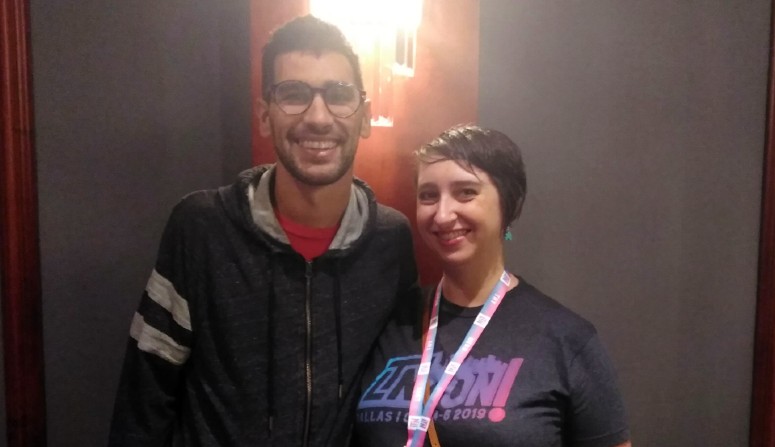 Dice Club members meeting in person for the first time at LTN Con 2019.

Welcome to… — I think most “roll and write” games would work, but this is the one I’ve played. As long as you put a camera over the cards, you shouldn’t have a problem. The game goes fast everyone plays at the same time so there isn’t a big wait time between turns. You can play 2 or 3 games in just 45 or 60 minutes. It’s light, fun, and portable, and it’s very fun to play over video.

Villainous — This is the hardest one of the three. A big reason is that it takes the most communication, even when you are playing in person. I still enjoyed playing it, but it definitely requires more coordination and patience.

Here are a few more that I think would work but haven’t had a chance to try.

Quacks of Quedlinberg — Quacks would be a great game to play via video. It’s pretty much a solitaire game. Both players can set up the chips in front of them with one player keeping score. There aren’t many chips that affect the other person (but note that you’ll need to keep track of who takes which chip, as chips are a limited resource).

Ganz Schön Clever — This is another roll and write game, and the way it’s set up is perfect. As another game without a lot of player interaction, you can play with your own copy and just communicate the score to other person. There’s a small amount of player interaction at the end of each turn; otherwise it’s a perfect example of a game for times when you just want something to do with your hands while having a good conversation.

Overall, I don’t think I would be as deeply involved in this hobby if it wasn’t for playing games over video chat. It has enabled me to fall in love with the tabletop gaming community while working around my busy schedule as a husband, father, and pastor. I have been able to play games while also making friends in a community that goes beyond gaming. In the end, isn’t that why we fell in love with this hobby to begin with? We come for the games, but stay for the relationships.

Chris Mikesell
Veteran youth pastor, rookie board gamer. Chris has a passion for people, and thanks to this new-found hobby, he also now has a passion for beating people in games. When not working or exploring new board game worlds, Chris enjoys time with his wife and two boys in North Carolina (the better Carolina).