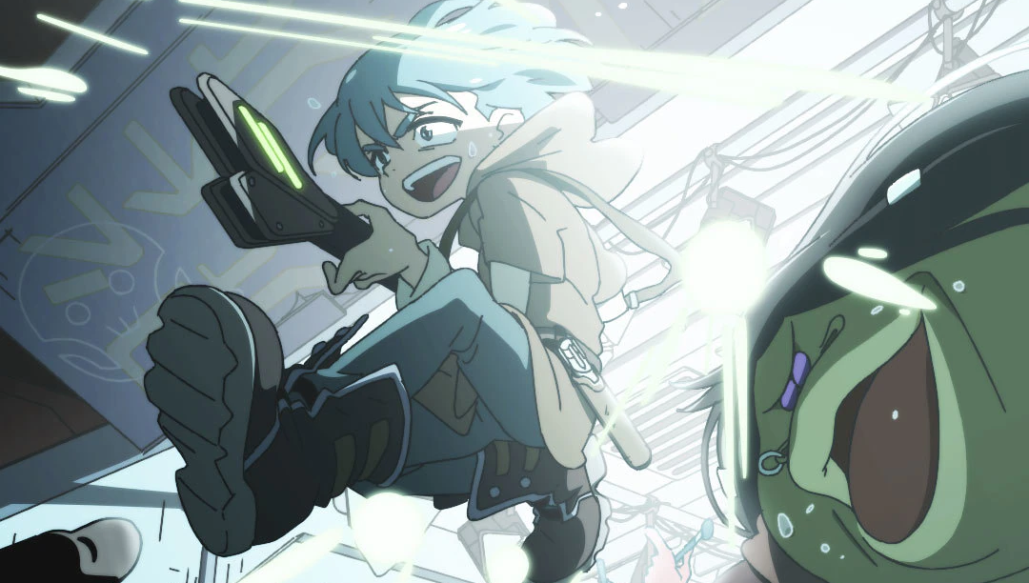 Before the arguments about prequels and sequels came in adulthood, Star Wars existed in my mind as something beautiful and epic as a child. It was both an awe-inspiring myth, expounding on the triumph of good over evil, and a fun fountain of boundless joy and imagination. “Tatooine Rhapsody,” the second episode of Star Wars: Visions (from Studio Colorido) is a refreshing drink from this fountain. Once again, Star Wars rocks. In more ways than one.

Sporting a Padawan braid, young Jay escapes a dangerous battle, perhaps the aftermath of Order 66, with only his life. He jumps to escape and crashes through a roof, landing in the guitar collection of Gee the Hutt. The duo form a band named “Star Waver” (missed opportunity to be “Jimmy Eat Galaxy”), blasting tail-thumping pop-punk in dive bars/wretched hives of scum and villainy. However, Boba Fett crashes one of their shows, as Jabba has put a bounty on Gee’s head. He later succeeds in capturing Gee, and Jay wants to fight to save his friend, but his damaged lightsaber emits only sparks. Knowing they can’t abandon Gee to his fate, Star Waver cooks up a plan. Rather than stage a breakout, they book a gig as the opening act for Gee’s execution at Mos Espa Stadium. Gee’s last song brings the crowd to their feet, begging for more. Rather than execute them, Mighty Jabba agrees to sponsor them, as Jay and Gee finally get to play an encore for their screaming fans. 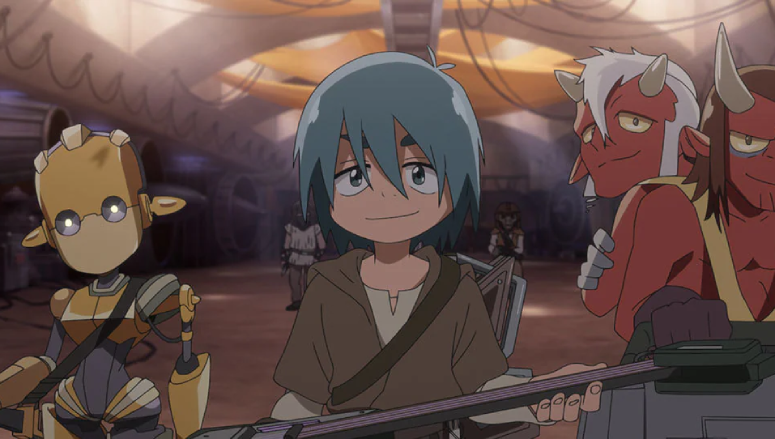 “Tatooine Rhapsody” hit me in the feels with the same intensity that Luke bullseyed womp rats in his T-16. I was born in the mid 80s, so, my teen years were soundtracked by pop-punk and featured many viewings of The Phantom Menace and Attack of the Clones. A further personal connection comes with my first encounters with anime via the original Pokémon series, as Studio Colorido worked on the recent, excellent web series Pokémon: Twilight Wings. To paraphrase Rick James, “Nostalgia is heck of a drug,” which makes this episode as potent as Death Sticks. “Tatooine Rhapsody” plays fast and loose with nostalgia and our expectations for a Star Wars story.

The overwhelming theme is the power of friendship, loyalty, and love in a found family. When Boba hauls off Gee, Jay and his bandmates are moved to act after listening to the recording of their first practice. It doesn’t just remind them of the good old days; it gives them motivation to go out and save their friend. Jay’s broken lightsaber is begging to be repaired, but rather than repair his sword, he beats it into a plowshare by making an instrument of war into an instrument of art: his new microphone. (To be fair, their guitars still have Mad Max-style flamethrowers.)

Memory is fickle and faulty. The good days weren’t actually as good as we thought they were. Rather than staying stuck in the past, we should learn from it and let it guide us into a better future

The episode’s title containing “Rhapsody” suggests an appeal to childhood nostalgia with longing for swashbuckling adventure and “old friends, long gone,” and the love we shared with them. But the Teacher–the anonymous author of Ecclesiastes–warned, “Do not say, ‘Why were the old days better than these?’ For it is not wise to ask such questions” (Ecc. 7:10, NIV). The older I get, the more I resonate with this verse because sometimes it sure seems that, yes, the old days were better than these! But memory is fickle and faulty. The good days weren’t actually as good as we thought they were. Rather than staying stuck in the past, we should learn from it and let it guide us into a better future. Or, as Jimmy Eat World once sang, “Th-th-th-things will never be quite what you want. Where’s it going to get you acting serious?”

I’ve noticed how myself and many of my peers have “come around” on the prequels, or at least, have embraced their madcap nature as meme fodder. I recently re-watched them for the first time in years, showing them to my kids for the first time. They’re not perfect, but they’re fun. As C. S. Lewis once said, reflecting on 1 Corinthians 13, “When I became a man I put away childish things, including the fear of childishness and the desire to be very grown up.” In this spirit, “Tatooine Rhapsody” succeeds in reminding us that even in the midst of conversations about art and wherever the story of Star Wars goes, it can still be a source of joy and childlike fun, best enjoyed with friends.