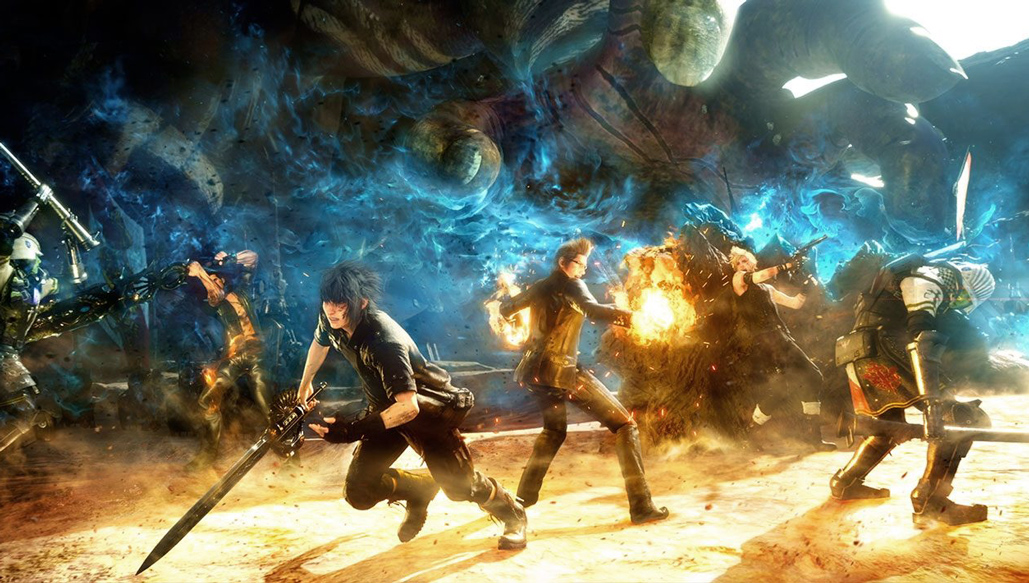 It’s been almost a month into my sheltering in place. I hear the fear and uncertainty on the news and in the conversations around me, but at the same time, I’m also hearing the amazing stories of doctors saving patients, young people delivering groceries to seniors, hobbyists 3D-printing face shields for hospitals. But you know what we also need in the middle of this global pandemic? Joy.

Of course the world needs more medical supplies and workers, not to mention the means to work and earn money to tide many of us over. But joy is essential to the spirit, and if there’s no joy, the spirit is crushed. And if someone has lost the will to fight, then the battle is already over. Joy doesn’t come easy to most people, but there are a few who spread it like wildfire. Joyful people—like Prompto from Final Fantasy XV—are who we need in times like these.

People say they appreciate my high spirits, but when I see people like Noctis’s friends attending to people’s more pressing needs with skill and intellect, those are the qualities that seem valuable. Like Prompto, I didn’t understand what there was to appreciate about me and my joyfulness.

Final Fantasy XV is about a band of brothers fighting monsters and saving the world with some fantasy politics thrown in. Your character, Noctis, is a prince on the run. His kingdom has been invaded, and he is on a quest to take back the throne with the help of his friends. His entourage consists of Gladio, Noctis’s powerful bodyguard; Ignis, Noctis’s chief advisor; and then there’s Prompto, Noctis’s best friend. When war breaks out with robot armies, supernatural beings, and monsters rising against this motley crew, Prompto has just learned how to fight. He has the lowest HP of the party, and you often see him tripping over his own shoes or reeling back from the force of his gunfire.

However, Prompto’s the one in your party who whoops and cheers after you win a skirmish, cracks jokes while you’re crawling through creepy dungeons, and snaps pictures of the crew to share around the campfire at night. He confides to Noctis later on that despite his cheer, he’s afraid that he’s useless compared to the other guys. But not to me. 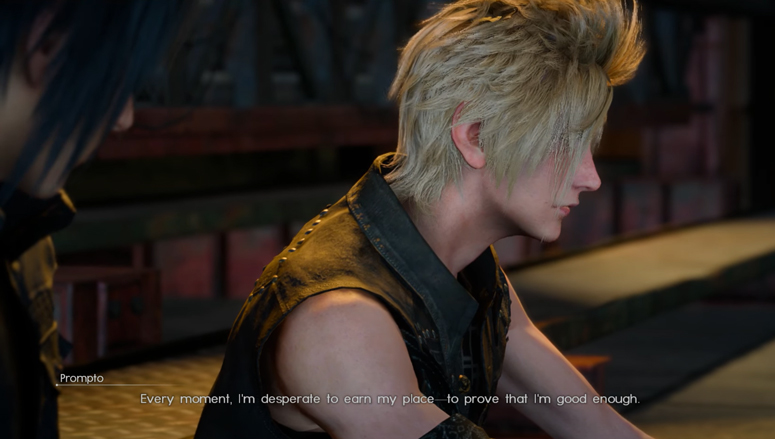 I never thought I had much to contribute either. In fact, I thought people called me joyful because they couldn’t think of anything better to say. I thought “joyful” was the same kind of shallow praise as saying someone is “nice.” It doesn’t take any effort on my part; I’m always quick to laugh, first to celebrate small victories, and behind all the surprise parties and pranks. People say they appreciate my high spirits, but when I see people like Noctis’s friends attending to people’s more pressing needs with skill and intellect, those are the qualities that seem valuable. Like Prompto, I didn’t understand what there was to appreciate about me and my joyfulness.

I think part of my struggle to understand why joy is meaningful to society is because I live in the US. My country values individuals who are bold, persistent, and independent. But Asian cultures like my own see people as part of a whole; they value what individuals bring to a community, not only to one’s self. You see that in Asian stories as well, whether with a tight-knit team of heroes that join together to form a super robot or a colorful cast of athletes on a volleyball team.

We don’t often realize how valuable joy is until we’re in the darkest of times, but that’s when it shines brightest; joy reminds us what we’re fighting for.

According to Asian cultures’ values, Prompto does have a role to play as the “mood maker:” the person who lifts everyone’s spirits. His profile in the game even lists one of his key traits as “lifting his comrades’ spirits when the going gets tough.” What if joy was always meant to be shared? Does having joy also mean giving joy? And what would happen if I lived that out more intentionally?

A couple weeks ago, early threats of a pandemic had forced our organization to cancel our upcoming St. Patrick’s Day potluck and all other gatherings. I decided to whip up a backup plan by replacing the potluck with a week-long leprechaun hunt. When it launched, the virus had been looming larger in everyone’s minds. We lost two staffers who had to stay at home to watch their kids and had to turn away our volunteers to ensure their safety. Workers huddled in the breakroom, sharing their mounting fears, the death count, the mortality rate. 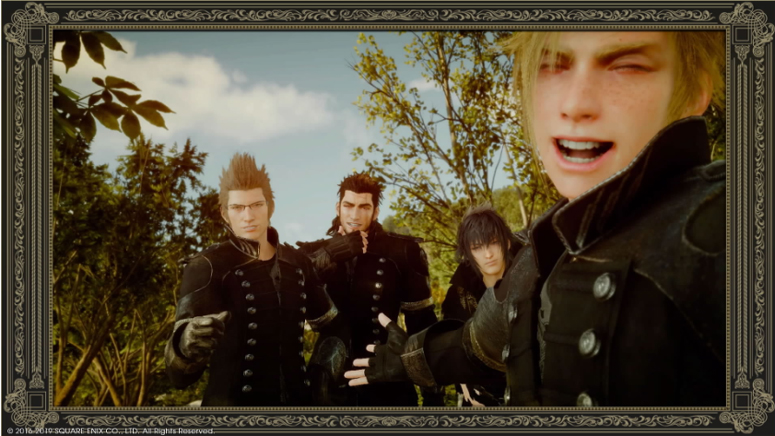 But the state of events did not deter people from the leprechaun hunt. If anything, they seemed more exuberant. Program managers took advantage of a late night meeting and turned the building inside out, scouring for the leprechauns. Staffers came into my office with a mad gleam in their eye, proudly declaring that they had spotted another one. Days later, I stopped by my boss’s office and asked, “Aren’t you glad I started this Leprechaun Hunt?” He turned to me and said, “I was just thinking about that. We’re going to need more of that in the coming months. Thank you for your fun.”

One of the ways that Prompto expresses his joy is through photography. He snaps pics of Noctis comically falling down, goofy faces of the crew, and moments he and his friends are the happiest together. Right before confronting the final boss, knowing that there’s a good chance that none of them may survive, Noctis asks to look at these photos one last time and takes one with him. I like to think that he needed that photo to get him through the roughest bit.  We don’t often realize how valuable joy is until we’re in the darkest of times, but that’s when it shines brightest; joy reminds us what we’re fighting for. 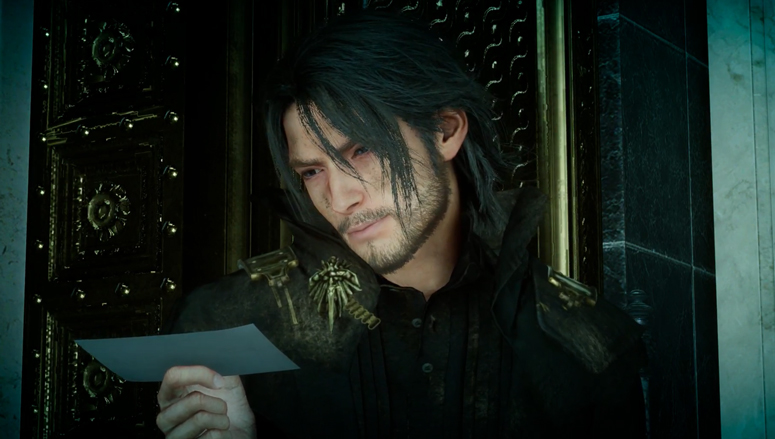 We all know that the worst is likely still yet to come. More people are going to get sick, and the economic fallout could last for years. We are going to need everyone’s help to win this fight. We need the smart to find the cure. We need the strong to care for the sick. We need the leaders to guide the masses. And the joyful? There is a place for them too. We need them to unite us with their laughter, show us there’s more to life than suffering, and remind us there are things worth fighting for.

Remember that in the days to come. Joy-givers, shine on.