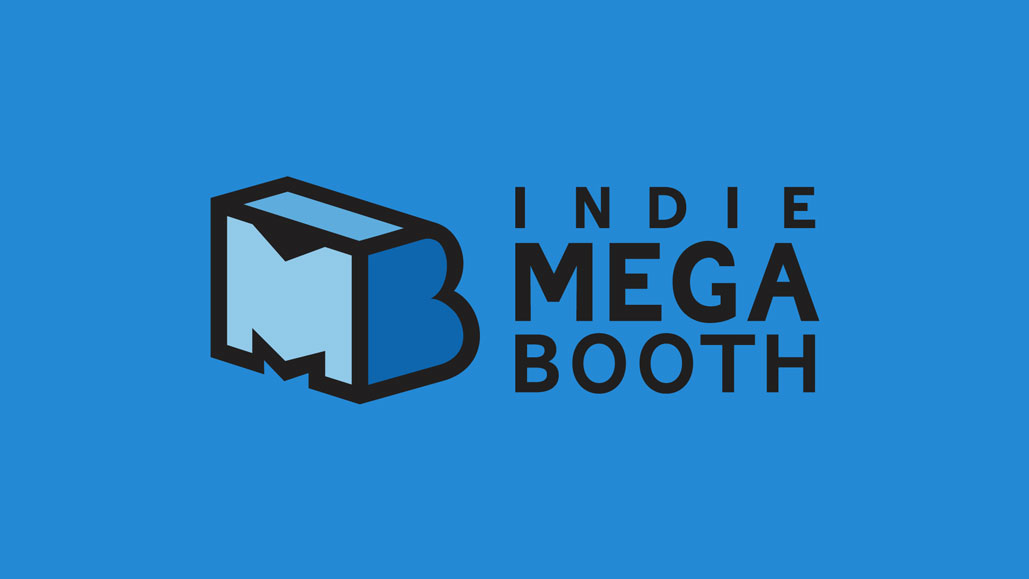 10 Indie Games You Must Play at PAX West

Dozens of publishers and developers will be descending on Seattle, Washington this year for a chance to showcase their upcoming titles at PAX West 2018. They will be trying to create buzz and anticipation, and to impress those who demo their games. Major AAA publishers will be there, but the lifeblood of each PAX convention has become the indie games. The teams behind these games are small, but they usually bring some of the most interesting, innovative, and heartfelt titles to the show each year.

When the Indie MEGABOOTH started at PAX West 2012, it featured 16 games. This year’s MEGABOOTH, Indie Minibooth, and Tabletop areas will feature over 75 games. Even if you bought a four-day pass, you might not get to them all. So this year, Love Thy Nerd writers Ryan Eighmey and Cameron Franklin combed the massive list of games at the MEGABOOTH to give you the 10 games coming out of the convention that might just have the most potential make an impact on the gaming landscape. 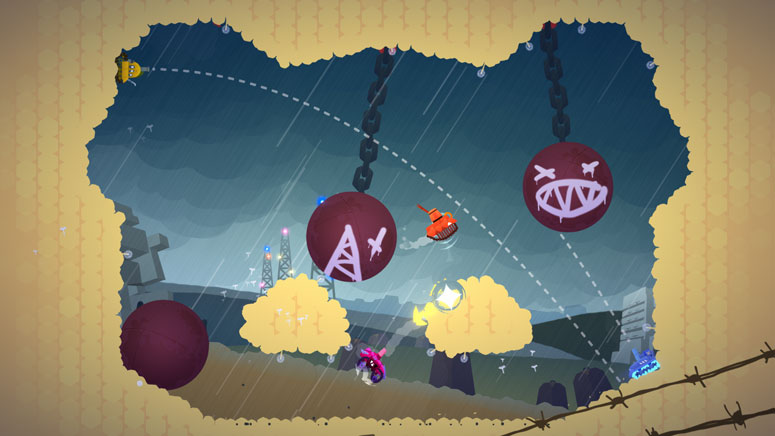 The last couple of years have brought about a renaissance in couch co-op/competitive games to the indie scene. Following in the footsteps of Lethal League and Towerfall: Ascension, Treadnauts brings players to the same couch and screen to battle each other in some intense 2D tank combat. Each match involves players controlling a tank that can propel itself through the air using its artillery cannon while also shooting other players down and riding along the walls, all with the goal of being the last one standing. The action is fast paced and should be a fun party game experience. 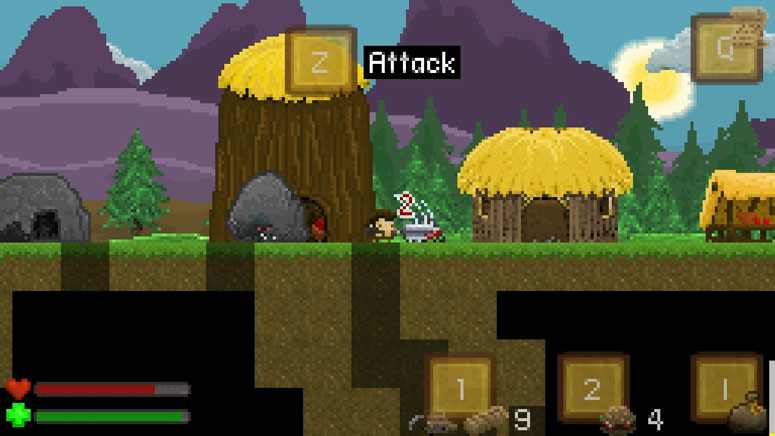 You’re plunged deep into the black, frigid waters. Your lungs scream for air. With your last bit of strength, you pull yourself ashore.

You have nothing but the clothes on your back and fallen branches all around. That ship was your last hope, and now it lies in pieces off the shore of this deserted island. Are you the only one who survived the crash?

The  side-scrolling exploring, mining, farming, and town management of Aground seems like a fun blend that could lead to really rewarding gameplay. On their Kickstarter page, the designers cite the major theme of the game as “progression” and you can work your way up to advanced technology and even magic. If you want a taste of Aground and won’t be at PAX West, the browser version of the game is free-to-play,or you can grab it through Early Access on Steam.

I played Sinner: Sacrifice for Redemption at PAX East last year and am encouraged by the progress they have made since. Sinner is a boss rush action game that pulls inspiration from Dark Souls. I love it when games mess with the formula and Sinner uses an interesting mechanic where before each boss you must sacrifice something, effectively leveling down as you advance. You may have to sacrifice part of your max health or reduce your total number of potions. Like the games that inspired it, expect to die a lot on your path toward satisfyingly nail-biting victories. 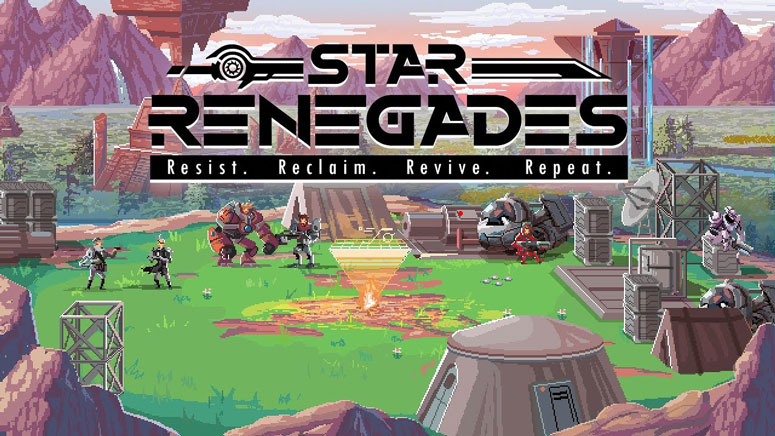 Massive Damage, creators of Halcyon 6, look to have a hit on their hands with Star Renegades. It has a classic look and vibrant art style that looks to rival games like Dead Cells, but as a rogue-lite tactical RPG. The most unique element of Star Renegades is its Rebellion Engine which “creates a unique experience with each playthrough via emergent gameplay and events, procedurally generated missions, shifting priorities, evolving enemies, and tons of equipment/upgrades for your squad.” It’s slated for an early 2019 release and I certainly can’t wait to give this one a go. 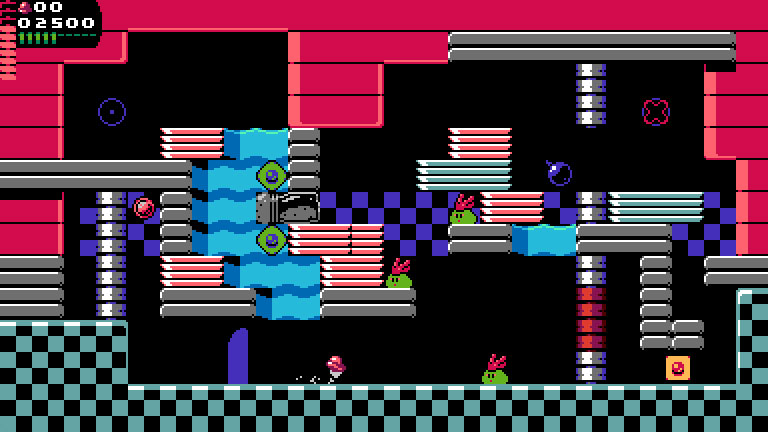 UFO 50 is named for the collection of 50 8-bit and 16-bit games in its collection. The games will range in genre and challenge, and with all the variety there are bound to be quite a few hits in this package. These 50 games should have something for any and all gamers that want to get their retro fix. I should also mention that it is being co-developed by Derek Yu and Ojiro Fumoto, the developers behind amazing indie titles such as Spelunky and Downwell, respectively.

This was a weird game to include because the trailer shows no gameplay, but the promise of a city-builder strategy game with futuristic ship combat might just indicate that Industries is a diamond in the rough. I really hope that the demo they bring shows off some the dynamic systems the game promises. I am hopeful that the game will reward players with complex and interesting building choices. Check it out and see if see if it lives up to the potential.

This game is not messing around. Developed by Paper Cult, designers of Fat Mask, Bloodroots is a top-down action game that looks to be very fast paced and very bloody.

In a world where everyone important wears character-defining animal skins on their heads, one man must set forth on a path of destruction in search of the reason for his betrayal. It’s not the plot that grabs me about Bloodroots, though. It’s the slick Hotline Miami-esque clobbering in the announcement trailer.

It’s not for the faint of heart as you will be using anything and everything you can find to slay enemies on your quest for revenge. The art style is also very cool and reminds me a bit of Firewatch, only with more blood . . . okay, a lot more blood.

It might be because I have been on a Detroit: Become Human kick but I am loving the idea of an isometric cop RPG in the vein of Torment: Tides of Numenera. Back in May the lead writer sat down with Matt Cox of Rock Paper Shotgun and pointed out that one of the unique aspects of the game is how you can fail. Not just fail as in die or get a game over, but you can be “just not a good enough detective generally to piece together what happens.” The game centers on a washed up cop in the midst of an existential crisis tasked with solving a case that requires more investment than he is capable of giving. If Za/Um Studio can deliver a compelling narrative from this framework, without holding players’ hands, Disco Elysium has tremendous potential. Check out our interview from PAX East with Disco Elysium designers Justin Sweet and Aleksander Rostov. 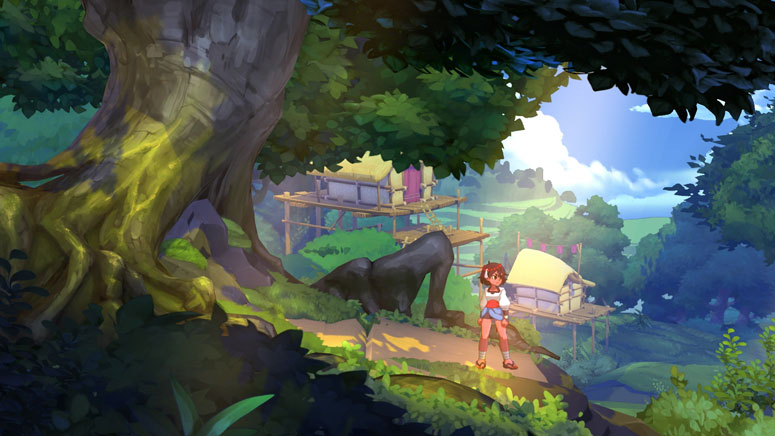 505 Games has cultivated a reputation for publishing standout mid-tier and indie games like Brothers: A Tale of Two Sons, Terraria, and Payday 2. Indivisible seems poised to deepen that reputation with its gorgeous, completely hand drawn world. The RPG combines “ultra-rare, real time party fighter mechanics” with platforming and boasts “a rich story telling experience” and “gameplay that’s easy to learn but difficult to master.” The platforming looks responsive and the combat looks varied through the game’s diverse party memebers. PC Gamer has a great teaser on the game including a brief overview on how the studios fighting game roots show up in the game. 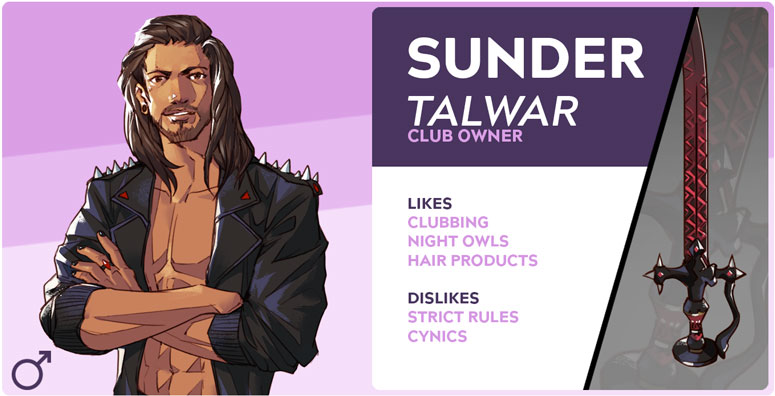 I grew up watching my dad wreck demons in Diablo on the PlayStation back in the late 90s. He played that game for years due to its gameplay loop of slay, loot, level up, and repeat. Boyfriend Dungeon looks to take up that dungeon crawling formula but adds a twist with a dating sim mechanic you use to enhance your weapons. Naturally, dungeon crawling and dating go hand-in-hand, each directly affecting the other. I’m not really into dating sims, but if you give me some fools to cut through in between, I’ll definitely play the game and hopefully learn how to woo my weapons. 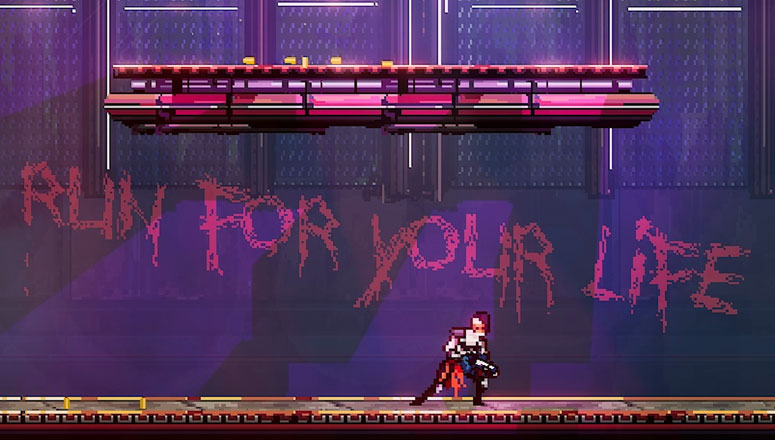 I am a huge fan of games that challenge genre norms. As roguelikes are popping up all over the place, it’s nice to see a truly unique take on the genre. Black Future ’88 has you play on a timer, so you can’t go slow and turtle for a “safe run,” and instead of side-scrolling you are traversing vertically up the levels which adds some pretty intense platforming. The 1988 cyberpunk feel of the game is neon and dirty in all the right ways. Make sure you check it out at PAX West, and check out our PAX East interview with the game’s Creative Director, Don Bellenger.

Thanks reading our list of the top ten games featured at this year’s PAX West Indie Megabooth. The list was complied by Love Thy Nerd Writers Ryan Eighmey and Cameron Franklin. Let us know what you think in the comments below, and also if there were titles you feel we may have missed.

Free Play
Podcasts
Do all these games lead to more games being developed in a rush and cultivate a lack of quality over quantity mindset? That’s what we want to talk about this week on the FreePlay Podcast. 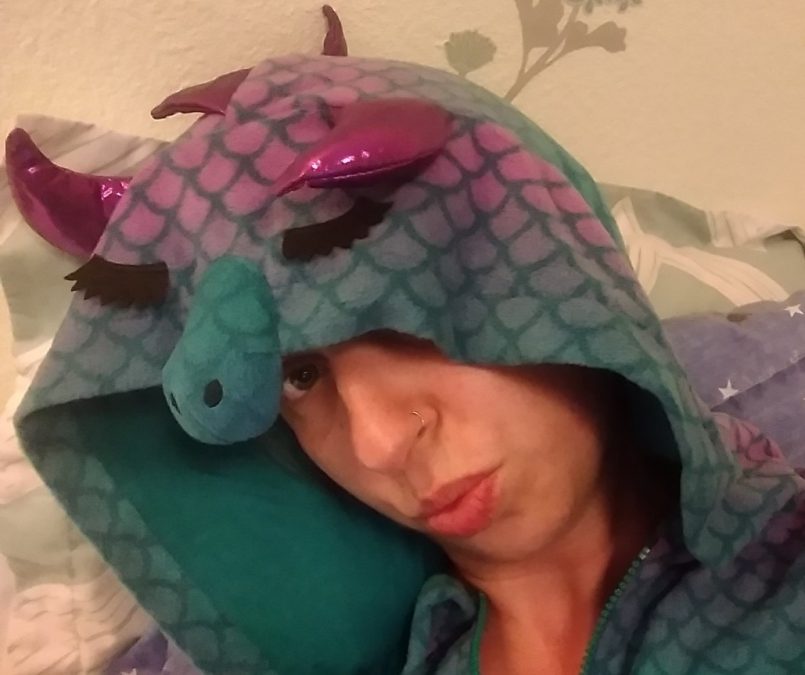 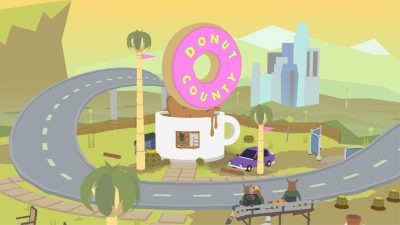 Humans of Gaming
Humans of Gaming
Ben Esposito of Donut County talks about his Jewish heritage, questioning what you are taught to believe, and why Super Mario Odyssey is truly a freaky game 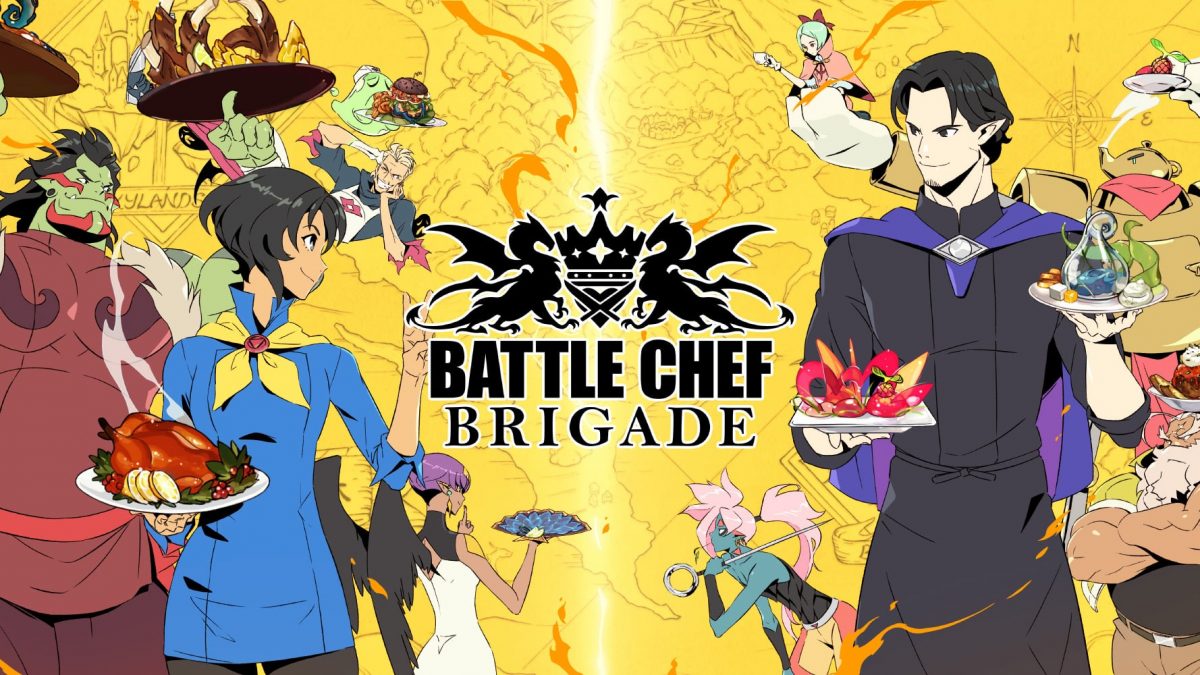 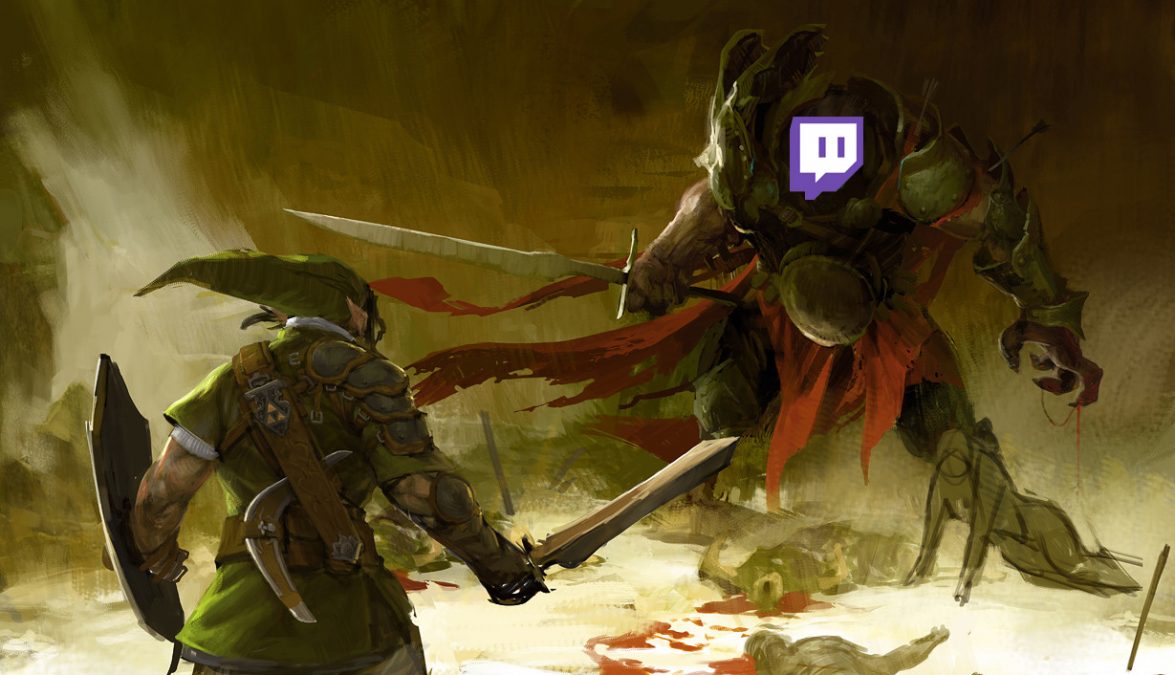